Right now I currently understand what it was going for and I do think it is a very unique and interesting game, but I’m not quite sure if I hold it in as quite high regard as most others do. I probably shouldn’t be surprised since I’m always very critical of postmodernist or meta titles. I’ve gone on enough about how much I dislike Gone Home or Dear Esther, but I was also highly critical of both Yume Nikki and Doki Doki Literature Club; both of which are highly revered titles.

Admittedly I’m still not quite sure what my thoughts on The Stanley Parable are. Most of what I say in a review is just what I think of at the time of writing. Sometimes I plan to say things but never do just because they don’t flow well with the rest of the review. I also am not the type to do multiple drafts either so what I put down the first time is usually what you see.

Expectations can play a lot into how one views a game. I knew next to nothing about The Stanley Parable going into my first playthrough. Given the nature of this game, there will be major SPOILERS for just about every major plot point so be warned. The Stanley Parable is yet another game that works best with a clear mind but it’s not a serious game like The Beginner’s Guide.

The basic plot of The Stanley Parable is about a man named Stanley, a man who unquestionably works a job that consists of nothing but pressing buttons for a number of years. This is until one day, all of his coworkers mysteriously disappear and he gets no button prompts to press. You then take control of Stanley and can do whatever the hell you want. I may be looking a bit too deeply into things, but the fact that the main character is named Stanley makes me think of Stanley Milgram, a psychologist who is known for a series of experiments that proved people are more likely to put other people in danger when they are ordered to by an authority figure. Considering the emphasis the story has on blind obedience to authority, this is either intentional or is on the same level of absurd thematic coincidence as Frisk looking like Beth Thomas.

Stanley is one of two major characters in The Stanley Parable. The other is simply known as “The Narrator,” and that’s precisely what he is; he narrates the story. That is not to say that he is an ordinary narrator though as he is more comparable to that of a dungeon master in a tabletop RPG… a really shitty dungeon master that railroads the players into their dumb stories they ripped from video games and that freaks out when the other players do something they don’t anticipate.

The narrator expects you to follow his story and gets very upset if you don’t. That’s the basic gist of The Stanley Parable but it’s also a massive oversimplification. You can follow along with his narration and do everything he says and the story will eventually reveal that Stanley was working at a mind control facility that effects the emotions of its workers. He then chooses to shut down the facility and runs off on his own.

The alternate routes include the goofy ones where the game gets fucked up and it turns into the quest to find the story by following the yellow plot line, to the depressing ones where Stanley goes insane and kills himself, to the outright scary and intense where the narrator traps you inside a building before a giant bomb goes off and proceeds to berate you the entire time. There are multiple endings to The Stanley Parable but none of them add to the initial plot or tie up any loose ends.

Fittingly enough I was in the same camp as the narrator early on in that I wanted to know more about the actual established storyline. I wanted to know what really happened to Stanley’s coworkers, just what the fuck was up with that mind control facility, and what the narrator is. This is why I brought up Doki Doki Literature Club earlier; they share a similar issue.

One may have noticed the the review taglines for both The Beginner’s Guide and The Stanley Parable have used the word “postmodern.” Now don’t tell this to any Jordan Peterson fans, but the word “postmodern” is not a synonym for “abstract” or “thing I don’t understand”… it also isn’t usually followed by “Neo Marxism.” Rather at its root, it refers to going against established rules and conventions. It specifically exists to prove that an established convention is not needed. Considering that storytelling and fiction has been around for literal millennia, it’s naturally quite difficult to cover any further ground so this means that going for a postmodernist approach is a total crapshoot.

Even postmodernist titles that I really like are a bit shaky in how they are handled. Both Eversion and Doki Doki Literature Club were unable to top the initial shock factor and kinda fizzled out afterwards. Undertale’s genocide route also is completely out of place and tedious to play (intentionally so) yet it also is the only place where the game references vital plot elements and thus justifies its playing despite the fact that the entire point of the genocide route is “don’t play the genocide route.”

The Stanley Parable is similar to the former two games in that I was much more interested in the base storyline then the narrator’s power trip, yet the full obedience route does not add anything and the story is practically non existent. The Stanley Parable is fully aware that it is “just a game” and thus it assumes it doesn’t need to take its plot seriously because of its self awareness.

This means that despite the several endings present in The Stanley Parable, there isn’t a part that truly feels like a conclusion. I just found myself getting bored rather quickly until I looked up the endings online. A fair amount of these endings are kinda obvious but there are also some other ones that fall into the “there’s no way I can be expected to figure this out on my own unless I went out of my way to experiment with every possible action” territory.

Therein lies the tragedy that most of The Stanley Parable’s genius lies in its attention to detail… that most players will never think to find on their own. The sense of discovery from finding these hidden endings without a guide would certainly be worth it if it weren’t for the fact that it involves needing to retread the same opening and walk the same paths over and over again in order to comb them for something to do differently.

The Stanley Parable is able to hold most people’s attention for the first few playthroughs no doubt, but most will just look up all the endings on Youtube rather than find them on their own. Hell that’s basically what I did; I found it more intriguing to watch them than to actually play through the game multiple times on my own to find them. 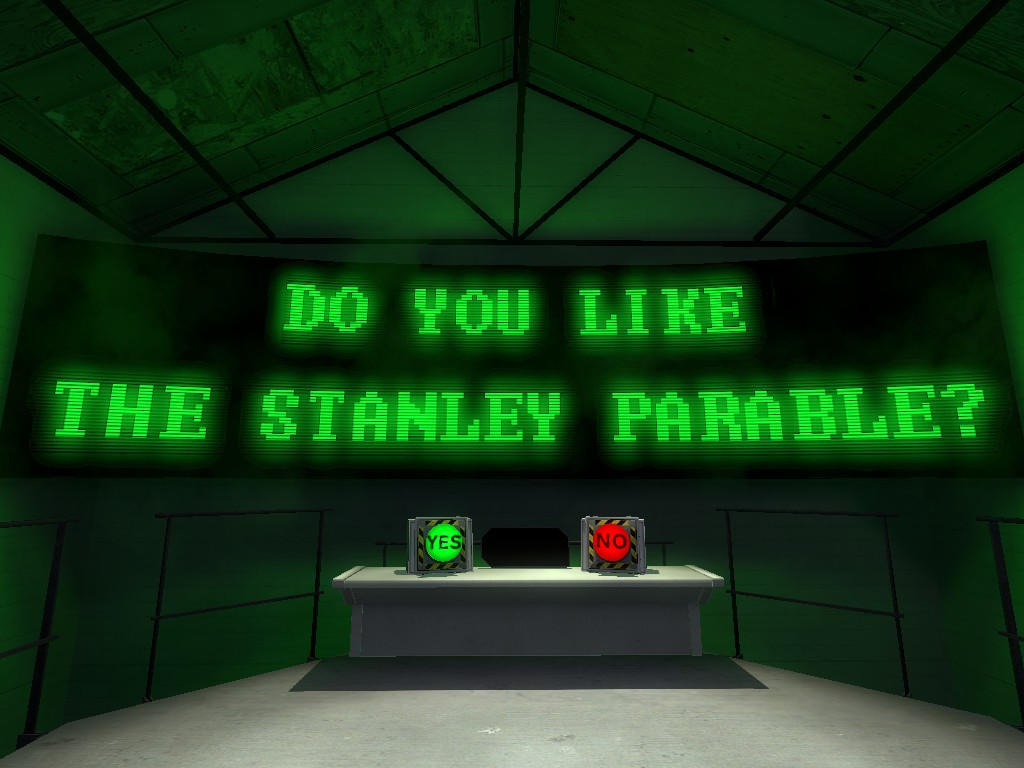 Well there is your review. 1400+ words later and… I still don’t know what to think of it. I can probably say I liked it; lord knows that the broom closet scene cracks me up far too much for me to say I dislike this game. I can also say I’d recommend it simply because it is an interesting and unique title that will stick out. I can’t say that I felt any sort of connection with it though or that I was ever really “impressed” so to speak… aside from that trailer they made mocking an obnoxious hater troll. That was flat out epic!