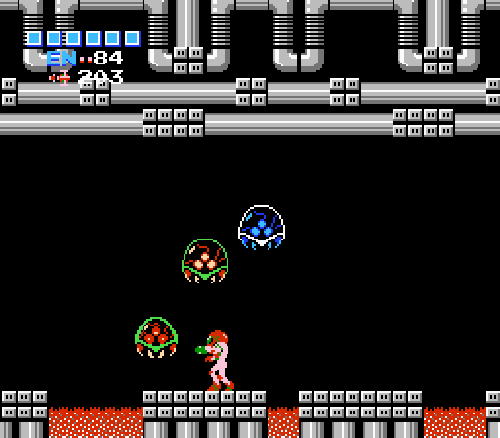 Recently I decided to play through the original Metroid on a whim. I have a specific set of games I want to play through, but I always tend to deviate from that schedule eventually. The reason why I decided to was because I have actually never played the first Metroid before this. I have played through Super Metroid, Metroid Prime, and Metroid Fusion before, but not the original. Granted I could have just played the remake Metroid: Zero Mission for the GBA, but I wanted to see how the series started. I wanted to play through the first Metroid just so I can ask, has it held up?

The answer to that the original Metroid does in fact pass the test of time, but it does so with a C minus. I did have fun with Metroid, but there was a lot of shit that really interfered with that and will be difficult to go back to. Nonetheless there is still quite a bit that puts this game ahead of mediocre clones like Legends of the Universe – Starcore even with the game’s age.

Metroid does in fact start off pretty rough considering the low health and limited range of Samus’s arm cannon. Requiring the player to collect an upgrade just for the arm cannon to fire all the way across the screen was nowhere near necessary, and it makes the start of the game rather frustrating. What is even more frustrating is the lack of ability to shoot diagonally or downward that leaves you open cheap shots.

Yes I know that the little guys that crawl along the ground in Metroid are not the worst enemy in that game, but they are far less convenient to kill with your starting equipment then Goombas or Octoroks. Metroid simply does not have a well balanced difficulty curve, and with the exception of the final area, is more difficult at the start of the game than at the end.

Within the first few screens of the game you run into enemies that pose little threat in later Metroid games, but are far harder to kill because of your lack of range and the fact that your projectiles don’t even travel all the way across the screen. Between that and your low health at the start of the game, this makes a rather rough start. While this isn’t exactly game ruining by any means, it does make the game a bit harder to get into and was partly why I did not like this game at first.

Enough has been said about the lack of an in game map feature, but what really makes this a potent flaw is how many rooms look almost exactly the same. While I stand by what I said in my Starcore review, the black backgrounds likely contribute a lot to the confusion that results from navigating planet Zebes/Zebith/whateverthehell. On top of that, there are some moments that were designed solely to sell Nintendo power magazines because there is no way that most people would know how to find this shit otherwise, and this is just with main game stuff.

The fact that one needs to re-collect the wave or ice beam in order to use it definitely makes things inconvenient considering that you HAVE to have the ice beam to kill the metroids in the final area. Thankfully there is a ice beam hidden in the Brinstar area that the player can pickup without needing to backtrack into Norfair to retrieve it.

On top of all this, there was more than one moment where I struggled to get out of small gaps between platforms, and there was even one point where I spent up to five minutes trying to get out. Also don’t even get me started on the fact that you aren’t restored to full health after dying. There are a ton of gameplay issues with Metroid, but I still did get some fun out of it.

The reason why the original Metroid is still fun even with all these grievances is the sense of progression and atmosphere. The music is still fantastic and the graphics are… okay I guess. It’s from 1986 so it’s not going to take the system to its limits or anything. Quite simply put, it still is very satisfying every time you pick up another missile expansion or health pack, and there is something naturally satisfying about being able to mow down all the normal enemies with the screw attack after they gave you so much trouble before. And that final escape sequence still gets my blood pumping even though it’s just a straight up vertical climb.

My standard for if a game has held up is if the game is still fun at its core. I am glad I played the original Metroid, but I would be hesitant to recommend it except for hardcore retro fans who somehow never played it. There is virtually no reason to play this over Zero Mission, but there is no reason one can’t play both, especially since Zero Mission features the original game as well.

Oh and I suppose I should also talk about how I feel about Samus being a woman as a twist. I think it’s kind of overrated to be honest. Maybe it’s just because of the whole “feminist” thing, and for all I know this could have done a lot for any women who played games at the time of release who realized that they to can be kickass action heroes, but considering the series provides an image of her wearing a bikini as a reward for playing the game, well I’m not so sure how to feel.

And no it’s not that I don’t like seeing Samus in a bikini, quite the opposite in fact, but it feels rather exploitative and doesn’t really add anything to her character… but she is hot……