Lamia’s Game Room was a game released silently within the depth of the now defunct Steam Greenlight. The only way most people would have played it would have been through one of Indiegala’s bundles, which was how I got it. Looking at the game’s Steam page, one will notice that the overall review rating for this game is “mixed” which is a bad sign right away. Another bad sign is the fact that the game is priced at $1.00, which usually means that the game is so short or simplistic that it should be free, but the developers still want to make some money.

Furthermore, the way the game advertises itself comes across as very damning. Its features are listed as “suspenseful and mysterious story line, RPG-style dialogues allows you to be immersed in the story, Stylish game design,” and “easy and simple game play.” Let us take this apart bit by bit shall we? “Suspenseful and mysterious storyline” basically translates to “we are going to leave you in the dark throughout the entire game and end on a cliffhanger.” “RPG-style dialogue” translates to “this game has dialogue, like RPGs do, and the dialogue is used to tell the story.” “Stylish game design” carries no real meaning and is just marketing drivel. Lastly “easy and simple gameplay” basically means “our gameplay is shallow and lacks depth to it.” The game’s actual content is no better.

The story is clearly intended to be the main appeal of this game, so naturally one would at least expect that to be decent. Unfortunately, the story is both horribly paced and poorly written. Right away, one will notice that most of the dialogue is very grammatically awkward and it was clear that there were no native English speakers involved with the translation. This already severely hampers the plot because it kills all of the atmosphere and tension the game was going for due to the dialogue being so awkward.

As for the storyline itself, we play as an unnamed protagonist who is simply referred to as “the player” who wakes up in an unknown location without his memories. A mysterious woman named Lamia tells him that he needs to beat two other people in a card game if he wants to survive, and if he loses he dies. I am sure that some people are aware that the “main character is thrown into a game of death against others while having amnesia” is quite a familiar plot set up. Other instances that come to mind that used this setup are The World Ends with You, and the 2015 anime Death Parade.

The difference here is that, while The World Ends with You and Death Parade handled their plots excellently, Lamia’s Game Room botches it completely. Instead of having a compelling sequence of events that slowly revealed more as time goes on, Lamia’s Game Room simply meanders the entire time until it leaves you with a “to be continued” screen at the end. For almost the entire game, I was expecting for there to be this huge twist to occur that revealed what is going on, but nothing ever occurred. The closest to said twist is a revelation that every character the player has met in the game was someone they knew in real life, but something like that is pretty much a given in this type of game.

Furthermore, the game’s pacing is incredibly slow. There are 12 chapters in this game, each chapter containing a game of old maid that you play against two other characters. The game is already short enough as it is seeing as how you can beat it in under three hours, but it still feels like these short rounds of old maid greatly dwarfs any actual plot development. The entire plot just consists of “you go into a room, you have to beat two guys in a card game, you ask Lamia what the hell is going on, and then Lamia says she will tell you when you beat two more guys.” As a result, Lamia’s Game Room is a game that gets boring very quickly.

The game’s art design is fairly decent. It is not anything special but it serves its purpose well. The same can be said about the sound effects and the music. The gameplay, however, leaves quite a bit to be desired.

As I have made abundant, the gameplay of Lamia’s Game Room is a simulation of old maid. For those unaware, Old Maid is a card game where three players are given five cards each. Every one of the cards has a matching card in one of the three player’s hands, and if a player has a two of the same cards in their hand, then both are discarded. The fifteenth card is the old maid, and the players each take turns picking a card from another’s hand until every card but the old maid is discarded; whoever has the old maid is the loser.

In Lamia’s Game Room, this is virtually the same game except in terms of aesthetics where the old maid card is instead the Lamia card, and the other fourteen are represented by the seven deadly sins. There is one other element that is missing from Lamia’s Game Room however. Old Maid is a game that is based heavily around gauging the other player’s reactions and trying to bluff your way out of trouble; IE there is an element of interaction between players. 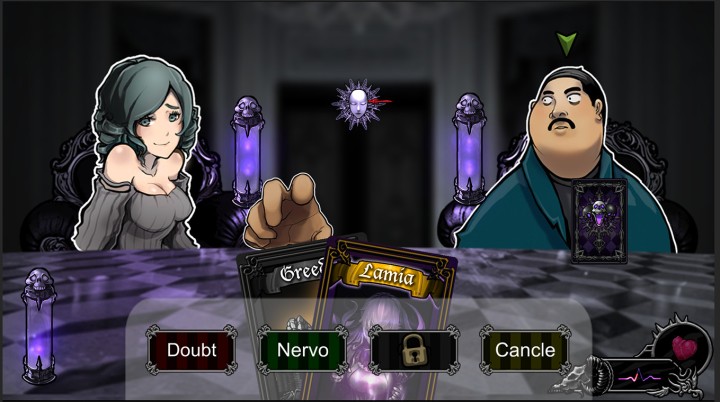 Lamia’s Game Room tries to implement this in a few ways. It succeeds at implementing it by giving you the opportunity to react a certain way when an opponent is picking from your hand while you are in possession of the Lamia card. The three reactions you are given are to look suspicious, look nervous, or to grin, and you can only use each of them once per game. Your opponents will react in either one of two ways when they are used. They will either react the normal way where they will change their minds if you look suspicious or grin, or they will act the opposite of the normal way where they will see through your bluff if you look suspicious or grin, but will change their mind if you look nervous.

Unfortunately, when it comes to you picking their card, this element is completely lost. The game was clearly supposed to implement this at some point seeing as how the character’s facial expressions will change depending on which cards you select, and they will say different things. The problem is that these facial expressions and statements came across as much more random and were not consistent.

As a result, a lot more of the game is based simply on pure luck than in a traditional game of old maid, and less on any sort of strategy. In addition to this, you also need to win four games of old maid against each pair of opponents and if you lose twice, you need to start over even if you only had one more game left. This simply makes your losses all the more infuriating.

Lamia’s Game Room is just flat out shallow. It is one thing to have your gameplay be a simulated version of a traditional card game, but it is even worse to serve as an inferior version to it. As such, I can’t recommend Lamia’s Game Room as an old maid simulator. The plot does not make the game worth playing either due to its poor pacing, translation, and its lack of an ending. Even for its small price point of $1.00. Lamia’s Game Room does not belong in your game room.

This review was originally posted as a GameFAQs user review on October 4th of 2016, and has been reedited with enhanced presentation.