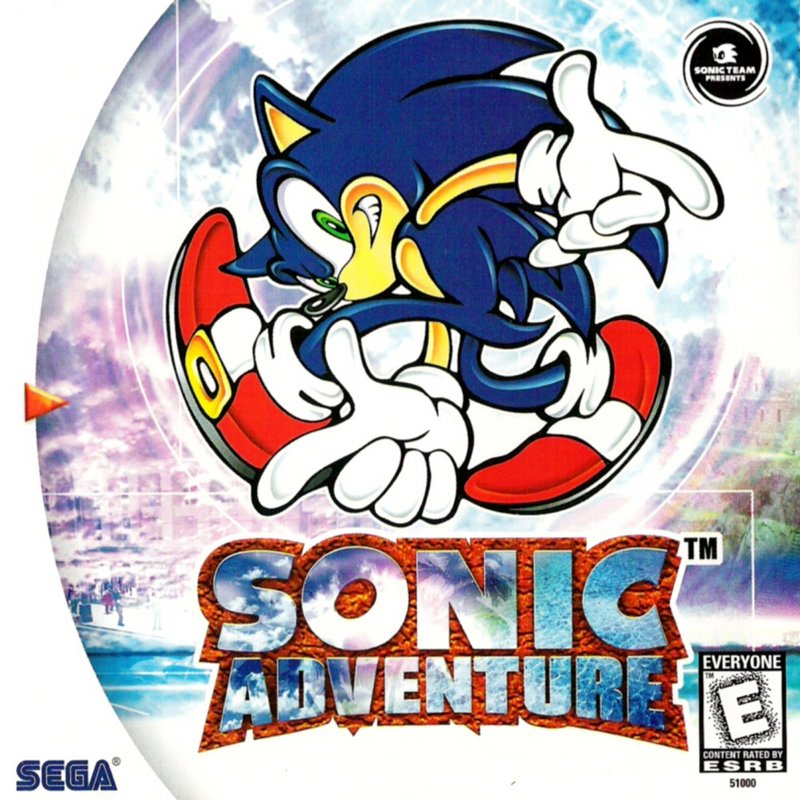 Sonic Adventure was a game that I grew up with, and recently took the opportunity to replay through its steam port that I got on sale. Looking back on it, I always noticed that there were some flaws with it but still felt nostalgia for it anyway. After replaying it, my opinion is mostly reaffirmed except that I found them more emphasized. The flaws were more grating, but the good parts of it were more apparent and I still had quite a bit of fun with it.

The story in Sonic Adventure is mostly a mixed bag. The writing is very stiff and basic, oftentimes to the point of being laughable. Even as a kid I was able to understand the problems with the game’s writing and easily understood what others criticized it for. Despite this, the game held a unique charm to it that drew me to it.

It is hard to not have a smile on your face due to the sheer corniness of the game’s dialogue and presentation. The way that Sonic says, for instance, sounds like something out of the original Teenage Mutant Ninja Turtles cartoon, the way how each character’s leitmotif is a vocal song with lyrics about their back story and motivation, and the general lack of subtlety just gives off a really charming feeling to it, and is one of the few things I’d describe as “so bad it’s good.”

However, it still does not change that there are some aspects of the storyline that are interesting on their own merits. The way that you have six separate characters that you play as and see how their stories individually intertwine into the events of the main storyline was a nice approach. Unfortunately the Tikal flashbacks during each of them got quite repetitive and broke up the flow of the storyline, especially during Knuckles storyline where there were three of them.

One story of note was E102 Gamma’s storyline, one of Robotnik err Eggman’s (this was the point in the series where they started calling him Eggman in North America as well) robots that becomes sentient and turns against him to free the animals inside his brothers. This serves as a surprisingly deep deconstruction of the main concept behind Eggman’s method of creating robots since the first Sonic game. It also has what was a surprisingly emotional ending.

By today’s standards, the graphics in Sonic Adventure are clearly dated, but I have always made it a point to not focus too much on technical quality and more so on artistic quality. There is a nice variety of different level designs and the game has a nice pleasant look to it. However, the facial animations are really awkward with characters eyes randomly bulging and their eyelids shifting positions every time there is even a remote reaction to something. This was Sonic Team’s first attempt at 3D animation and it really shows.

This voice acting is very poor and stiff as well. The way the lines are read often sound similar to how the lines are read off in a Charlie Brown special as if they were read by young children. This does however, add a bit too the game’s aforementioned cheesiness which actually goes well with the corny dialogue and overall ridiculousness of the whole thing.

The sound effects are very solid and have a nice use of the classic effects from the original games. The music in the game is very solid as well giving a unique feel to every stage, event, boss, and character in the game and it is hard to think of a single bad track in the game (aside from Amy’s obnoxious theme song which is at least obnoxious in a way that fits her character).

To get one thing out of the way rather quickly, Sonic Adventure is a very glitch and buggy game, but it is buggy in a way that does not interfere too much with the main game and is still fun to play. However, that is not denying that the game should have been tested better and that it would be a better game without all these bugs. Some examples of these bugs are occasional clipping, graphical glitches, and invisible walls, but again, one can still have fun with the game. Another important thing to mention is that the keyboard controls are terrible, so it is advised to use a controller.

The gameplay of Sonic Adventure is different depending on which of the six characters you play as. This is an interesting way of providing a nice variety of different gameplay modes to the player and having a varied game, even if there are some problems with each. Sonic’s levels are what most would think of from a typical sonic game; running quickly to the end of the stage through giant loops and performing outrageous stunts while doing so.

What really deserves credit is just how well the sense of speed was transitioned from 2D to 3D, and just how satisfying it is to blast through levels, even if they are somewhat easy. Tails stages are basically the same as Sonic except you are racing him and have the unfair advantage of being able to fly. This makes it very easy to cheese your way through stages. Knuckles stages consist of searching an open ended section of one of Sonic’s stages in order to find pieces of the master emerald. He is assisted by his ability to climb walls and glide across distances.

Amy’s stages involve light puzzle elements and evading one of Eggman’s robots named Zero (not related to the Mega Man X character) that was sent to capture her. Big’s stages are basically a fishing minigame to catch his frog with the highly creative name of Froggy. Lastly, Gamma’s stages involve trying to get to the end of the level before your timer runs out, which you keep from depleting by building up combos by shooting enemies and other targets.

None of these levels ever feel too out of place and even some of the weaker ones like Big and Tails’ stages are still enjoyable to an extent. The key problem with the gameplay, however, is that it is really only the main story that is all that great. Collecting every emblem in the game requires completing the levels under certain conditions such as beating it in under a certain time limit or with tougher AI; IE some really uncreative missions. Even worse is that, in the ones with the time limits, you have limited continues and can’t reset without losing a life, which means you need to restart the level from the beginning after only a few retries and can’t reload checkpoints.

In addition to these, the DX version of Sonic Adventure has additional missions that you need to find in the hub world after completing their storyline and clearing them counts as an additional emblem. Of course these ones are naturally very tedious and require you to jump through a bunch of hoops by either wandering around looking for them, or looking up a guide, but in the original console versions and the 2004 PC release, there were unlockable Game Gear games to play as a reward. Unfortunately, these Game Gear games are no longer offered as a reward in the Steam version, which renders these missions pointless. There is also the Chao raising minigame that is large enough to practically count as a game of its own, but said minigame is infinitely improved in Sonic Adventure 2 so you’re better off going with that game if you’re looking for a Chao fix.

There may be many problems to Sonic Adventure like the laughable story and the bugs involved in the game. However, these things can generally be overlooked because the game is fun to play. I enjoyed playing through Sonic Adventure DX again after several years due to the unique charm it possessed and because the base gameplay was enjoyable. I’m hesitant to say that this is one of the greatest games ever made, but since when was that a requirement to play a game? Overall Sonic Adventure is a game I’d recommend checking out if you have not already done so.

This review was originally posted to GameFAQs on April 21st of 2016 and has been re-edited with enhanced presentation.