Having been born in 1995 and grown up in the 6th and 7th console generations, I missed out on a lot of classic titles. I didn’t know how to use emulators at the time and I was always very careful using my money so I didn’t get every virtual console title I was interested in. For fucks sake I only just recently started playing through the Castlevania series. The issue that comes with trying to revisit these older games is that not only is there a fuck ton of them, but that new games don’t stop coming out either.

Then there are people like me who have backlogs with 900+ games and who is constantly watching all corners of the market for anything interesting. Gargoyle’s Quest is not quite as popular as a lot of the more fondly remembered classics of the time period. For those that don’t know, Gargoyle’s Quest is a spinoff of the Maki-mura/Ghosts ‘n Goblins series starring one of those little red demons that everyone hates so much. I kinda failed to mention in my review of Ghosts ‘n Goblins that the original arcade game was from 1985 and thus was pretty advanced for the time but likely aged poorly. The same can probably be said of Gargoyle’s Quest.Gargoyle’s Quest was not just a simple sidescroller like Ghosts ‘n Goblins was. The game has instead had many RPG elements such as an overworld map, towns, NPCs (btw thanks for tainting that word gamerbros), as well as stat upgrades that you are given over the course of the game. The overworld map is really just for show because there are no sidequests of any sort and the game is strictly linear. The only time any sort of exploration comes into a rather annoying puzzle near the end where you will have a lot of spots that lead to the same level but put you somewhere you could have gone by walking, yet one of those spots will have you complete that same level and lead you to the next place you are supposed to go but you only know which one because of an NPC and even then you likely won’t get it because the message is cryptically worded. I know that last sentence ran on for way too long but it just sounds funnier that way.

For some God forsaken reason, Capcom thought it would be a neat idea to include random encounters in a non turn based game where you get no experience points or levels. Instead you get the games currency from these random battles, which can be used to buy extra lives. The random battles are similar to those in Zelda 2 with the exception that you cannot run from them. Thankfully most battles are short so they aren’t too intrusive, but they also do not add anything significant to the game either.

The story is slightly more involved than most games of the time. It’s basically “evil wizard rules the world go kill him” but with a Halloweeny setting but it was kinda neat to see unfold. The key problem with Gargoyle’s Quest is that the RPGs elements don’t really make the game any more fun to play. It is kinda neat that they did some of these things but it really only adds aesthetic. As much as I enjoy the music and the graphics in this game, the problem comes with the gameplay. 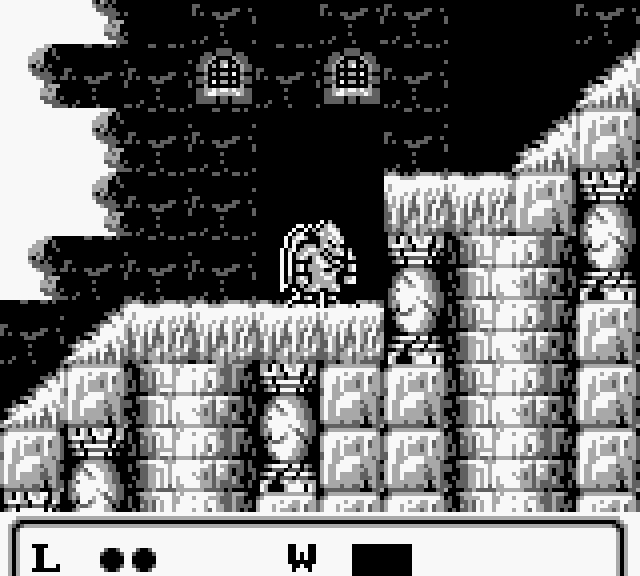 Gargoyle’s Quest does definitely have its moments, but I found the the base sidescrolling levels didn’t do much for me. The first major issue was the lives system and needing to restart from the last town you were at every time you run out of lives… which will happen a lot. Right now I am currently undecided as to whether or not Gargoyle’s Quest is as hard as Ghosts ‘n Goblins, but I will give the latter credit in that it at least granted infinite continues. In Gargoyle’s Quest you have to backtrack through the world map AND start a level over again.

Additionally, most enemies later in the game will knock off two or three hearts per touch (when the max amount you get by the end of the game is 5 and go through most of the game with less) and the few recovery hearts you find are often in hard to reach areas where you will take even more damage trying to get them. There are also a lot of cheap hits that you can’t avoid due to the fact that Firebrand can cling to walls ala Ninja Gaiden, but he can’t slide down them and will always jump right into a hazard if it is placed right above the wall he clings to.

So this naturally will make the game frustratingly difficult if you are playing on an original system, but if you are playing the e-shop version then you can use restore points. That is what I did but it always feels like I’m cheating with those despite the fact that I likely would not have had the patience to complete this game without them.

So the question is whether or not I would recommend this game, and the answer is… maybe. Unless one is particularly determined, I won’t imagine them completing the game but there were some fun moments. I’m unlikely to play this game again though. I do however plan to give the sequels a shot given that they could improve on this, and I’ve heard a lot of good things about Demon’s Crest. Also I am interested in the other Ghouls ‘n Ghosts titles as well so I may play them to.