Welcome to another edition of “obscure indie visual novels that only eight people on planet earth have heard of and only three including me care about.” I am your host Annie Gallagher and today we are taking a look at Silenced: The House on Steam and Itch.io. I actually may have never even heard of this game myself if it were not for the fact that this game’s developer followed me on Twitter and this game came up in conversation. I was initially planning to ask for a review copy, but after seeing that the game was only $2.00 at full price AND on sale since it just launched I figured I wouldn’t be losing that much by doing so. In hindsight this was a bit of a mistake on my part since

Going into it I saw some potential but had no clue if it would be used. This was the first game released by Graven Visual Novels (or at least the first commercial release) and it shows in some aspects. The first noticeable instance of this is with the character designs. The concepts and direction seem like they could work but it’s easy to become distracted when you could tell they were made in Rinmaru avatar creator.

More specifically, their faces were made using it while their bodies were made with…something else. Rinmaru only lets you create the face and upper chest area so it meant one would just need to wing it there. I am not going to say that using a program like Rinmaru is bad altogether, but the best choice of action would have been to use it for a basis for their designs that you can draw later without the limitations on an online dress up program. Otherwise there’s some definite Sword Art Online disorder going around here. I am pretty sure Rinmaru had the options to change up more than just hair and eyebrows so I don’t understand why that wasn’t used. Also what the fuck is up with Kate’s mouth? 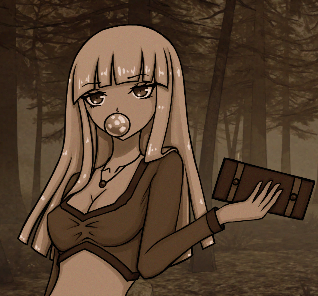 Let’s count everything wrong with this mouth design shall we?

1: There’s no tongue, lips, teeth, or anything that is usually in someone’s mouth

2: It breaks through the outline of her face despite the fact that it’s part of her face and that mouths don’t stretch that wide.

3: It looks like she is sucking on a pacifier with a nuclear symbol on it. Damn she must be into some strange shit!

Among other things, the necks stretch out way too long and the faces are way too androgynous. I’m a lesbian but I’d totally let Martin go down on me in an instant if his personality wasn’t absolute shit. But either way it should be pointed out that these criticisms only apply to the dialogue portraits. The in game CGs on the other hand are amazingly drawn.

What makes the out of place nature of the dialogue portraits all the more apparent is how much they clash with the sepia backgrounds. The background images make excellent use of this art style but Rinmaru designs were not made with monochrome color schemes in mind. These character designs stick out like an intelligent comment on a Breitbart article during the dialogue sequences as a result. Aside from the bad character designs, everything else is solid and appropriate.Music is tense and atmospheric and the illustrations are frighteningly gruesome.

But yeah, just about everything here is riding on the story given that the characters are unlikable assholes that you feel no remorse for when they inevitably get slaughtered. While I suspect that this may have been intentional as part of a twist, there are some aspects of these characters that came across as unnecessarily grating and only sour the mood of the whole thing. Our two male protagonists are misogynist fuckboys who can’t seem to go three lines without slut shaming yet Kate is equally unlikable in terms of snobbishness. Oh and also ableism.

I honestly can’t tell whether or not we are supposed to sympathize with these dumbass teenagers or not. Regardless of the twist that I will spoil shortly, it does not change the fact that these idiots were presented as ordinary teens. Even if we are intended to dislike these characters, it is never a good idea to make them both shallow AND grating.

Silenced’s twist (those two words next to each sound horrible when spoken) is that the idiot teenagers are not ordinary idiot teenagers; they are idiot teenage serial killers. The main character Ashley is in on it the entire time and is making a deal with a supernatural entity to bring them to the restless spirit of their victims that will proceed to enact graphic vengeance on them. The only problem is that A: Ashley is not allowed to do any harm to them herself and must save it all for their victims, and B: she’s messing around with dangerous occult shit that can get her killed if she fucks up.

What works so well about the story for this game is how it leaves the player in the dark the whole time in order to set a more human atmosphere despite the very inhuman situation (and inhuman characters for that matter). There is a huge sense of risk that comes with every choice you make and seeing all the twists and turns unfold is absolutely thrilling. There is not much more I can say without spoiling even more.

As intriguing as the story is, some of the writing is a bit awkward and jarring. Having Ashley say that she’s a monster “as horrifying as Pennywise from Stephen King’s IT” or having totally not Sachiko saying “this isn’t like a boss from some RPG” in the middle of serious cutscenes tends to kill the mood a bit, especially considering that games are not a relevant subject in Silenced: The House.

The writing and the weak characters, along with the game’s short length of at most 2 hours, prevent Silenced from reaching the same lasting impact as Corpse Party or Euphoria. That being said, the story was highly engrossing and is more than enough to ensure at least one read through. Silenced: The House only costs $2.00 which is easily a fair price considering the amount of content and the quality of the content and I am looking forward to any future games that Graven has in store for us.

[…] I just wanted to. And of course one can add Megadimension Neptunia VII, Nekopara Vol. 3, and Silenced: The House to the review queue and I’m back to square one. I did finally knock out Secret of the Divine […]