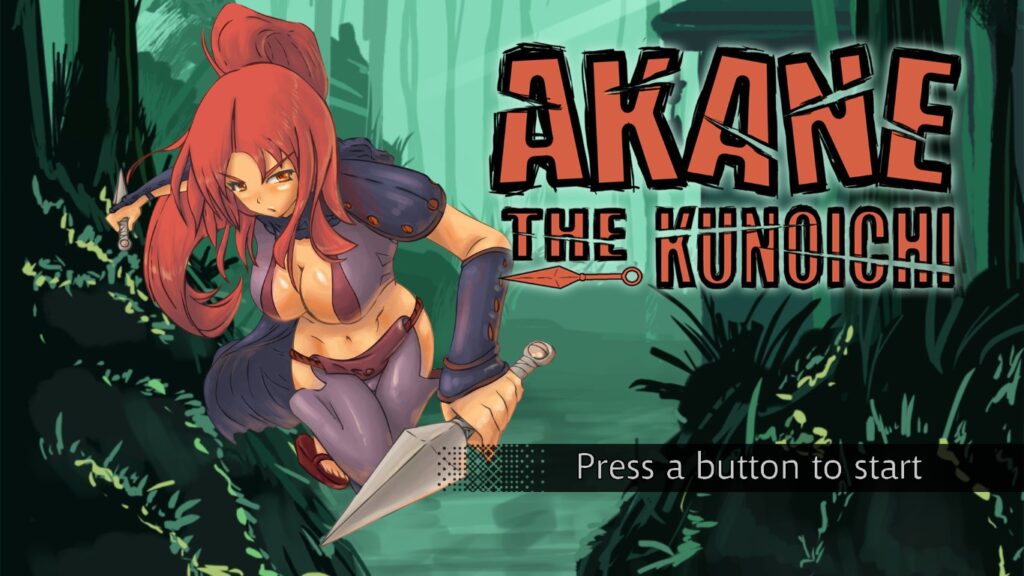 Akane the Kunoichi is a fairly decent platformer that was enjoyable to play. I am unsure if I would say it was particularly remarkable, but it worth its three dollar price tag. I will acknowledge that it isn’t necessarily an all time classic however.

In terms of story, there is nothing other than an excuse plot. It is basically a role reversal rescue mission where you play as the titular Akane. Our protagonist has fairly little personality either, although playing as an attractive female ninja is good in my book. Graphics wise, the game has a decent retro look without resorting to pixelating everything. Akane’s soundtrack is mostly bland, royalty free, elevator fluff that fails to leave any impression. The only memorable track was the boss theme with its admittedly badass guitar riffs.

Akane the Kunoichi is a sidescrolling platformer that is fairly reminiscent of Ninja Gaiden, albeit more simplified. This means that you need to focus on dodging enemy attacks while clearing some tricky platforming segments. There is also a similarity in that both Akane and Ryu can cling to walls and perform wall jumps. Akane, however, has a habit of clinging to a wall every time you jump into one, which is quite inconvenient.

Akane’s main method of attack is throwing kunai knives similarly to how Mega Man fires his arm cannon. All enemies take only three hits, so you will never have a problem with one single enemy due to how rapidly you can throw them. The difficulty comes from the creative enemy placement, and the fact that they often appear in a cloud of smoke when you pass a certain point. There are only four enemies in the game; one walks back and forth, another throws kunais, another throws his hat similarly to Kung Lao from Mortal Kombat, and the last is a ninja dog that requires you to crouch to hit it.

The difficulty curve is rather unbalanced, and it spikes abruptly towards the end of the game. It is an easy game for worlds one through three, moderately difficult on world four, than outright brutal on world five. While the difficulty is at least fair, the game lacks memorability except for the final world. The reason for this is due to a mix between the easy difficulty and the uninteresting aesthetics of these worlds.

The designs for these worlds are just the typical field, temple, cave, canyon, and fiery castle level lifted from the Mario series. These levels have little personality and there isn’t anything to really make the game stick out.

Another complaint I have is that Akane the Kunoichi is very light on content. You have five worlds in the game, each of which are three levels. Furthermore, all of the levels are quite short, and there’s nothing to do besides reach the end of the level. There are no alternate paths or hidden secrets to find, power ups are few and far between (and you almost never find them on boss stages either), and you can only clear levels in one specific way. As such, this greatly takes some of the edge away from the game.

Akane the Kunoichi is a fairly standard platformer, albeit not entirely remarkable. One can tell this from some other subtle aspects, like the damage sound effect playing twice consecutively when dying, or seeing the special attack animation even you already died. Yes they don’t effect the gameplay, but they just show that the game is merely okay.

Akane the Kunoichi does have solid enemy design and handles challenge properly. The boss battles are also fairly challenging in the way that boss battles in 2D side scrollers typically are. There some added content in the form of collecting optional garbs in each stage. Unfortunately you will likely get them all on your first playthrough, and you get no real reward for doing so.

Akane the Kunoichi is only $3.00 at full price, and there is definitely enough to get your money’s worth. It is even more of a deal when it is on sale for even less. As such, I can recommend the game to fans of sidescrollers who are interested.

This review was originally posted to GameFAQs on June 28th of 2015, and has since been re-edited with enhanced presentation.