Playing through Ib was a fascinating experience. Free to play RPG Maker horror games seem to be surprisingly common, and it surprises me that you don’t see many professional developers copying their format. There has always been something unappealing to me about most standard horror games. The kind that consist almost entirely of jump scares and “run and hide from scary monsters” moments. While that isn’t an inherently bad premise, It seems a tad boring to me to rely on assaulting the players senses rather than horrifying them through the content of the story.

Games like Corpse Party, and to a lesser extent Mad Father, have exemplified this kind of approach to horror, and it’s part of why I hold them is such high regard. Ib on the other hand, was a bit heavy of the jump scares and rubbed me the wrong way at points. Don’t get me wrong, Ib was a very well made horror experience and had a lot of tense and frightening moments, but I have to wonder how many of them were just from sudden loud noises.

As I write this review, it is occurring to me that Ib is a much more flawed game than I initially thought. If this review needed to be condensed into a simple category of “good” or “bad,” I’d definitely go with good. There is way too much that this game does well to simply dismiss it, and I think that any fan of horror games owes it to themselves to check this one out. That isn’t to say that it’s flaws should not be noted though. 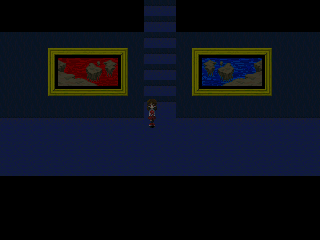 Ib’s story opens where the five year old eponymous Ib and her parents visit an art gallery for a fictional artist named Weiss Guertena. The short version is that she goes off on her own and a bunch of weird and creepy shit starts happening. The five minute intro to the game was especially well executed and unsettling, so I don’t want to spoil anything. I will just say that it sets the tone perfectly.

The story and characters were both fascinating and I was drawn into the ominous setting throughout. I really have to praise the game’s effectiveness at lore building considering that I thought Guertena was a real life artist at first, and I have to give similar praises to the game’s artwork. The music and sound effects were also highly effective, though the latter may be TOO effective. 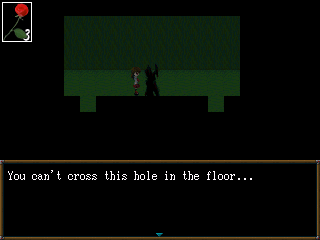 It often felt like some of the loud noises were a bit excessive, and often times they came across as more annoying than scary. I will at least grant that there are points where they do amplify the game’s actual scares, but when used for shit like having an arrow shot at you that will likely not hit you, it comes across as overly try hard.

The biggest flaw with the game is the limited save files, combined with the fact that you need to play through the entire game again to access the bonus level. I really do not see how anyone could think adding a new game plus to a non RPG is ever a good idea. Horror games are naturally stress inducing and draining, and puzzles are based entirely on figuring out the solution. This means that a second playthrough will consist mostly of not being scared by things you’ve already seen, and re-doing puzzles you already know the solution to. Predictably as fuck, I just decided to get every ending I could get without replaying on NG+, then I just looked up the rest on Youtube.

Overall I would definitely recommend Ib as a horror experience, but I seriously don’t get why some developers make games these ways. The atmosphere is unnerving, the story is engrossing, and the game is fascinating, but I seem to be a bit short on things to say about it. It is free to play though, so it’s definitely worth a look.