I’d say I’m surprised it took me as long to get around to Nekopara Extra as I did, but I’m really not. This is just what happens when you not only have a ton of games to play AND write reviews for, but also are busy in several other areas of your life. I’m also so backed up on reviews that I’m basically writing this review a month after completing the game so my memory may be a little bit fuzzy in regards to the specific plot events, especially since Nekopara Extra is a pretty short game.

While Nekopara Extra is longer than Vol. 0, it is still pretty brief and doesn’t really feel like a full game. Then again, I don’t think Nekopara Extra was intended as anything rather than a brief prequel to each of the remaining entries. Nekopara Extra was a game offered as stretch goal of the Kickstarter campaign for the OVA based on Vol. 1. There was actually an additional stretch goal to make an additional animation based on the then non-existent prequel… a stretch goal for a stretch goal. The campaign fell short of the $1,000,000 dollars needed for that stretch goal, but the fact that a series of visual novels about catgirls reached $963,376 to begin with is quite remarkable. I doubt you’d see that kind of support for a Sakura Spirit OVA.

I bring this up because it’s easy to assume that the Nekopara series is just otaku pandering trash from a brief glance. It’s easy to assume because of the premise of the series can be construed as problematic in concept. Chances are if I were as much of a feminazi as I am now when Vol. 1 came out, I may not have given this series a chance. Granted I still might have done so anyways because regardless of how left my political views move, I will never stop being gay as fuck.

The point is that there were some aspects of the series as a whole that I unquestionably accepted in the earlier entries but have come to question now. Of particular note is the fact that, when you think about it, Nekopara is about treating women as pets. This is clearly not the intention of the series, but I realize that this sheds a light on how the series can be perceived from the outside looking in.

Additionally, there are weird things like the main character’s sister having an incestuous crush on him, and the whole dynamic of having sexual relationships with characters that serve a similar role to that of children. It is not that I never thought about them at the time but I was more of the impression that it doesn’t really matter if I still enjoyed the games. In the present day I still feel the same way if I enjoy a game overall. I positively reviewed Duke Nukem Forever despite the fact that it has about as much respect for women as a GOP congressman after all.

They key difference between now and then though is that back then I kinda trivialized them and downplayed the significance, and thus only eluded to it. I shouldn’t have done this because it is important for me as a critic to create a review that can help people understand whether or not they want to play the game regardless of my own personal feelings. The Nekopara series may not be everyone’s cup of tea, and that’s fine. I also bring this up because it is an issue with Nekopara Extra as well.

A recurring feature of the Nekopara series is the ability pat the catgirls (and Shigure for some reason) on the head and on the chest. While it is a bit on the objectifying side, I will at least give credit that it is less out of place than in something like Fire Emblem Fates. The problem with Nekopara Extra is that it is about Chocola and Vanilla when they were very young, yet the ability to pet their chests remains, which gives across some less than fortunate implications.

I have a theory about why this was the case, and it isn’t “Neko Works is pandering to pedophiles.” It is rather that Nekopara was always a series with a bit of an identity crisis. My theory is that the series started out as just a game meant to capitalize on the catgirl sensation, but Neko Works also got ambitious with it. Contrary to popular belief, game developers and writer are often creative and ambitious people. Some may find the premise questionable but the game itself also has a lot of progressive themes.

Vol. 3 in particular was about Maple’s desire to be seen as more than just a cute catgirl and to have a successful career as a singer. This is a very smart way of examining the impact of fetishizing and infantalizing a group of people can be harmful to them, even when there is no direct harm done. It is also in contrast to a chunk of the game’s target audience who played it precisely because they think catgirls are cute. The conclusion that can be drawn is that Neko Works are trying to keep the initial appeal of the series while also expanding the series into more than just “cute cat girls.” This leads to a balancing act between audiences.

Back on the subject of the chest touching, I think the reason it was left in was just because people would bitch if they removed it. While I am unsure if Neko Works is actively averse to the inclusion of this feature, there would be a cacophony of people claiming that Neko Works and Sekai Project “went full SJW” if there was any removed content from the Japanese version, and the most likely reason it was left in the Japanese version is not because they think it is integral to the core of the game, but because Japan has a more hands off with these kinds of games and companies rarely get in hot water over questionable content.

That being said, the ability to touch young Chocola and Vanilla’s chest should not have been in the game in the first place. Hell it shouldn’t really be there for any of the other younger characters but especially not Chocola and Vanilla’s, and I hope that future games don’t find it necessary to include these just for the sake of appeasing lolipantsu6969.

The plus side is that this can be completely ignored and the game itself is emotional and touching as usual. I am still as surprised as ever that a game about catgirls is able to make me relate so much. The feeling in particular that everyone around me is nice to me and loving yet I still feel lonely and often worry that people secretly hate me. 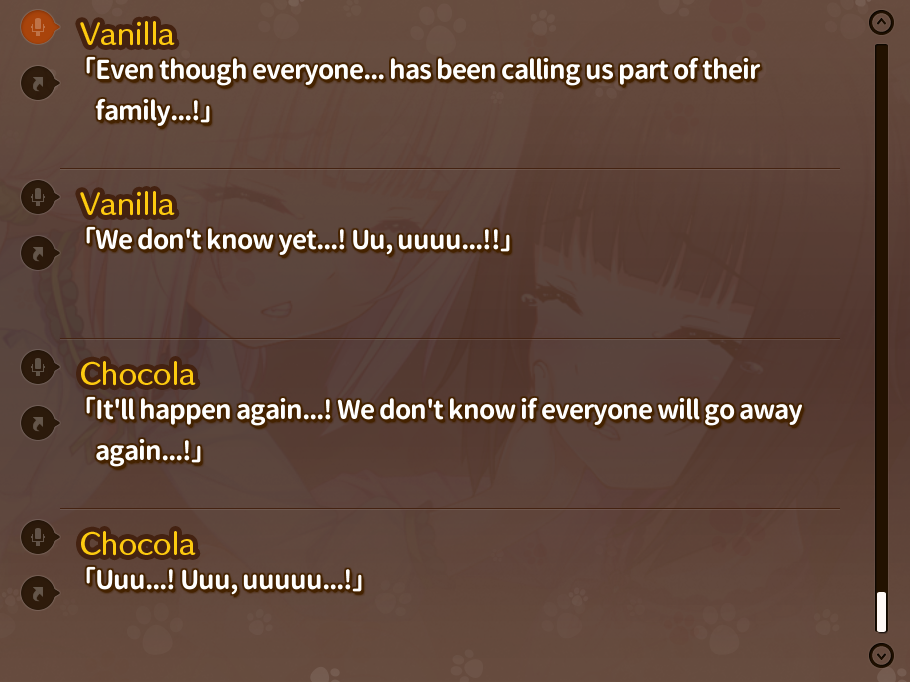 The greatest strength of the Nekopara series has always been in its characters. Not just in the catgirls themselves but the main character Kashou is still one of the best eroge protagonists I’ve ever played as. So many of these games have the same interchangeable bland idiots as MCs yet Kashou is shown to be genuinely caring, loving, and hard working. It actually makes sense for him to have a harem considering that even as I lesbian I can tell he’s the type of man that boys should aspire to be like.

Lastly, the ending was beautiful even if it came too quickly. The Nekopara series looks like it’s just otaku pandering trash on the surface, but there is always a sense of warmth and beauty to these games that separate them from the myriad of “perverted male idiot peeps on the ladies and gets the crap beat out of him” simulators.

If it sounds like I haven’t said much about the game, it’s in part because of the game’s short length and because most of what I said in previous reviews still applies. Anyway it is good to have this review done and my apologies to Sekai Project for taking so long to get this one out. Also I still have four more reviews to write so I might still be busy but hopefully I do get around to reviewing another Sekai Project title before Vol. 4 is released. Heart of the Woods looks very appealing after all.

This review was originally posted to my Patreon on April 22nd of 2019 for patron only viewing. You can read my reviews one week before they are posted on Guardian Acorn if you pledge $1.00 or more to my Patreon account. New reviews are posted every Monday. You can also follow this blog if you would like to be kept up to date on my stuff, or you could follow me on any of my social media pages (listed at the bottom of the page) and could stop by The Guardian Acorn Discord chat if you would like to talk to me and my homies.