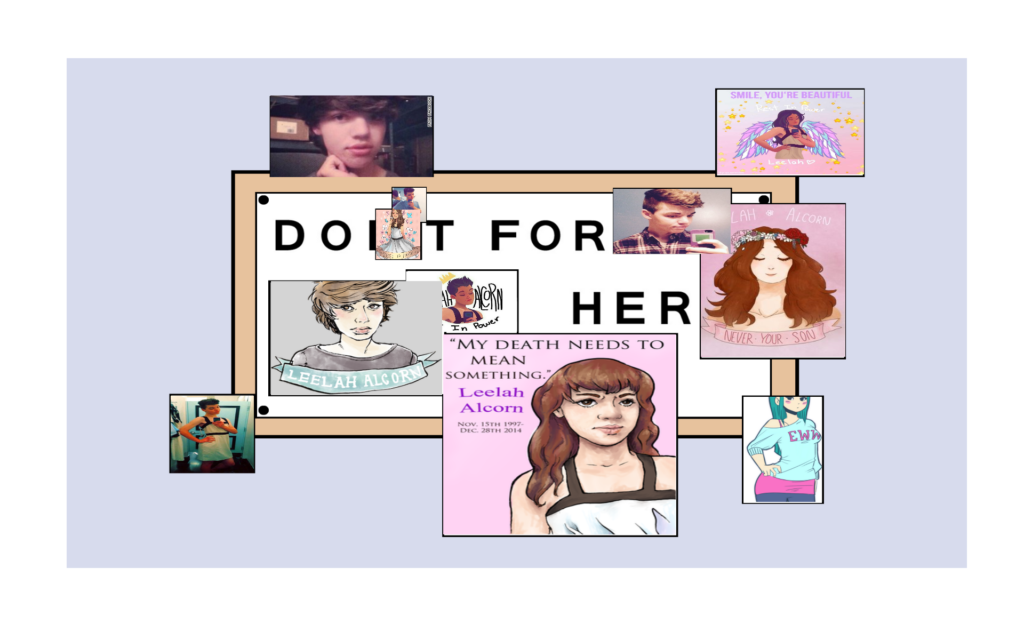 Leelah Alcorn is a name whose utterance fills me with sentimentality. For those unaware, Leelah Alcorn was a teenage trans girl from Ohio who killed herself in 2014 due to her parents refusal accept her when she came out as trans, and attempts to send her to conversion therapy. She had her suicide note set to be published on social media hours after her death, and it soon caught international attention from the mainstream media.

At the time that she died, I had no idea who she was, but I wish I did. It deeply shames me to think that I was still a GamerGate supporter at the time she killed herself. I know the two aren’t related but I doubt that she’d have wanted anything to do with me if I approached her then, but if I were like how I was now I may have been able to save her…

Providing a loving and nurturing community for trans people and other queer people and allies has been one of my biggest aspirations with my own Discord server. It means so much when I hear others tell me how much my server has helped them become happier and express themselves more. I know fully well what it is like to feel hopeless and alone, and I don’t want anyone else to feel that way. It is because of this that I wish I could have been Leelah’s friend. Her reason for her suicide was largely because most of her friends from Tumblr abandoned her once she returned. As someone who gets a majority of her social life and support through online interactions I can only imagine how that must have felt.

A while back I wrote a piece simply titled “Continue, Don’t Quit!” This piece was in response to a movement of the same name among bloggers to show people just how many of us truly care when they think no one does. I was especially passionate about that piece because I’ve been in that same exact position multiple times. I’ve even had one of my readers tell me those exact three words in reference to this piece back in April when I was deeply suicidal following the failure of my previous relationship. I have incorporated the drawing from this piece into Guardian Acorn’s main logo precisely because it is the precise kind of message I stand for, and I still stand by every word of it.

Looking through the archives of Leelah’s Tumblr page, it is disturbing just how similar it is to the social media posts of many of my friends. I am not a therapist nor do I have any formal training in such, but I’ve had frequent experiences talking my friends out of suicide and even trying to help people I barely know on occasions. This is all despite the fact that I often have struggled to find the reason to live myself.

I find myself continually impressed by the resilience of many of my peers. While my own situation is hardly an easy one to cope with, there have been so many I’ve known in worse situations that have still pushed forward despite everything. I often wonder how much it would take for me to really end it all. The answer would most likely be if I lost everything… including the strength to get it back.

The often overlooked aspect of Leelah Alcorn’s suicide that people fail to mention is the isolation and loneliness. Her parents clearly did not understand how important the internet was to her, and many parents clearly do not understand this either. Many of them still think the internet is all fun and games while failing to realize that it could be the only way for their kids to feel comfortable.

Many incompetent parents make the mistake of viewing their children as an extension of themselves. Conservative parents to LGBT children are especially heinous in this regard with what they will go through in order to “fix” their kids because a book says it’s wrong. I don’t mean to devolve into anti religious prejudice but seeing how petty the reasoning for all these Bible thumping child abusers and their heinous disregard for their children’s well being when they send them away to camps to “fix” them that teach them to hate themselves until they either commit suicide or repress core parts of their being long enough to pretend they are fixed, well it shows just how fucked up this religion is.

In my last political piece, I stated the following.

The truth is that none of us learned how to stand up to a bully back in Elementary school. They tell you to just tell an adult, but they never know what to do if said adult IS the bully. They never tell you what to do about the bullies in law enforcement and in politics. Right from the moment we are born, we are made to feel powerless. We are made to feel as if the life we live is absolute, that this is just how life is and that it’s ours to provide.

Funny enough, there was a picture on Leelah’s blog that brought up precisely this issue.

Carla and Doug Alcorn apparently didn’t get the message. I have been wanting to hold back on my rage against these two because anyone would be devastated by the loss of a child and that what they did may have been a result of gross incompetence, but no. I’m done tolerating transphobia in any form. If you are a transphobe, you are a horrible person; no exceptions. And I don’t feel the least bit sorry for the harassment that Carla and Doug Alcorn received. I don’t condone or encourage it, but I certainly don’t feel the least bit sympathetic.

Just how detached from reality does ANYONE have to be to send their kid to conversion therapy? How much do you need to hate gay and trans people to inflict this kind of pain on them? I refuse to believe that they didn’t know conversion therapy would have this effect; they just felt it was a worth the risk as long as they didn’t have a daughter instead of a son. There is no excuse for this filth.

I suggest we stop calling Leelah Alcorn’s death a “suicide” and call it what it was; a murder. Leelah’s last words to her parents were “fuck you. You can’t just control other people like that. That’s messed up.” If you ask me, she was too nice. I’m not even her and I have much harsher things I’d like to say.

I have no tolerance left for transphobes. I don’t care if you are a TERF, a conservative Christian, a “rational skeptic,” or an alt righter; if you are in the way of trans rights then you are scum and are lucky that “bigot” is the worst thing you are being called. If there was any justice in this world then you would be forcibly “cured” the same way you insist on curing gay and trans people. And if hearing this offends or upsets you; good.

Oh and if one of you approaches me as part of Continue, Don’t Quit, I’m going to tell you the obvious advice of stop being a bigot if you don’t want to be treated like one. I know that some of you are just naive fools but you need to know the severity of what you are doing. You are getting people killed. That may not be what you want to happen  but it will happen, and if you continue to do what you are doing knowing this then you are complicit in our oppression and our murder.