It just recently occurred to me that I have not done that much content on anime despite my weeb tendencies. Thus far the only anime content created specifically for this blog has been my review of Shoujo Tsubaki so I should probably fix that.

Anyway this is Mahou Shoujo Site, an dark magical girl series in the same vein as Madoka Magica, the series from the fucked up mind that brought us Say no Uta and that forever ensured all future magical girl anime had to be twisted and edgy. Thankfully I like dark and edgy almost as much as I like cute and endearing so this doesn’t effect me. The short version is that I enjoyed Mahou Shoujo Site and find that a lot of the criticism towards it is flat out moronic. Yes I know, how unexpected of me.

Our story stars Aya Asagiri, a girl whose life is complete and utter shit. She is often violently beaten and assaulted by the other girls at her school and her narcissistic older brother uses her as his punching bag to cope with the stress that come from their parents neglect and overly high expectations of him. The first episode opens with Aya contemplating whether or not to jump in front of a train on the way to school so unlike Madoka Magica, there’s no pretense about being kid friendly. 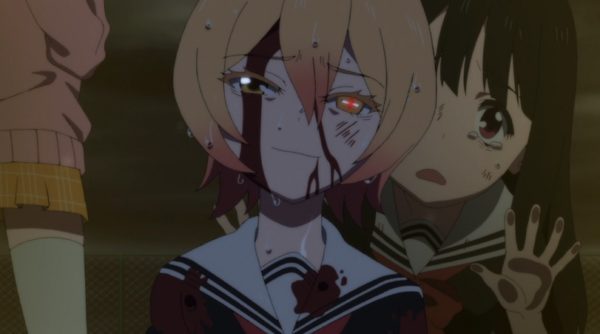 Some people have criticized the opening episode for being too over the top in regards Aya’s mistreatment, often with some dumb argument about how the bullies are written to be “too shallow.” I have a special distaste for this criticism because this is very clearly put forth by those who are either very sheltered or who willingly turn a blind eye to all the abuse that goes on in the real world. Some fucked up people DO exist in the real world; it isn’t bad writing to not make the reader sympathize with abusive fuckbags.

But what is even more insulting is that you actually DO get more fleshed out reasons for Aya’s bullies hating her so much. Specifically the main alpha bitch wanted to be Aya’s friend when she first transferred, but she mistook Aya’s silence that occurred from anxiety for that of the cold shoulder and got pissed. Is it a good reason for beating someone close to death on a daily basis? Fuck no, and it SHOULDN’T be! There should be no justification or excuse for this type of behavior!

All of these pretentious douchebags whose first response to any dark subject matter is to dismiss it as a cheap attempt at edge are those who choose to believe this shit doesn’t happen in real life. I have plenty of close friends who have lived through this type of shit and the claims that a realistic portrayal of living in an abusive environment is an attempt at “emotional manipulation” tells me that they are the kind of people who react with contempt towards emotion in general.

Now that I have got that criticism out of the way, I really liked how the story to this series has proceeded and I am hoping there is a second season for this reason. Thus far the major strength has been not only the dark atmosphere, but also that of the characters themselves and how many are driven by various trauma. Aya very clearly suffers from at least some sort of anxiety disorder given how shy and nervous she is, but she’s hardly the only one.

Tsuyuno had her parents murdered by a deranged psychopath and her only reason for living for many years was to torture said psychopath painfully using her newfound powers. Nijimi seems like the typical cute idol girl at first but also tends to develop murderous tendencies towards those that killed the only friends she ever had. Kosame was diagnosed with cancer and only has 6 months left to live and she cuts herself (which isn’t helped by the fact that her power is based on her cutting herself to heal others). Kiyoharu is a trans girl who frequently suffers transphobic beatings and harassment from her classmates, and wants to wait until they have found happiness to “throw their paradise into hell.” And Ringa is a swordswoman and the daughter of a Yakuza member, and she was kidnapped and raped by members of a rival Yakuza family before she killed them with her newfound power, which her mother took the fall for.

The reason that all these girls have such tragic backstories is precisely because that is how the magical girls are chosen. Those who have been deemed unfortunate souls, and that they specifically need to be women. As such it made me very happy to see that a trans woman was included in the main cast because that alone guarantees that “trans women are women” in canon in Mahou Shoujo Site. It really sucks that this is how low the bar is set for trans rights considering that even some of the most pro feminist anime or games don’t have that. It also sucks because there is a bit where Izumigamine outright derides Kiyoharu as a pervert (which is ironic considering what she does to her butler)  and Ringo steps in treating it as a “both sides” issue.

But the plus side to this is they get this one scene out of the way… and there is nothing else. Kiyoharu is treated the same as the rest of the girls. She’s not held to any standards, there aren’t any additional transphobic “jokes.” If you removed that one bit with Izumigamine then this would be one of the best trans portrayals I’ve ever seen in a work of fiction.

As for the rest of the plot, there are a lot of twists and turns involved and a certain tragic character death that really shook me up. Despite all the edge and despair present though, the series does try to present the silver lining in finding friendships with those who have been through similar hardships. The short version; Mahou Shoujo Site is gay AF and I totally love it! I love how it’s still able to weave and inspiring message into it despite all the heavy atmosphere of dread.

I also quite like the character designs and the animation. I remember liking the music even if the only one I can remember is the opening theme.I also felt there was a nice pace kept up with the episodes and I really got hooked on seeing how this depressing story unfolds. The only issue aside from what I already mentioned is that there is a rather problematic stinger at the end of the last episode (of the first season in case you are watching this in the future) where one of the male villains is molested… for comedic effect. Dude… that’s not funny… you wretch.