TW: Transphobia, Domestic Abuse, Homophobia, Rape.
Just a few moments ago, I came across a tweet from a rather prevalent trans writer I follow about an incident in a Toronto women’s shelter involving a trans woman. There was a link to an article by the National Post titled “Forced to share a room with transgender woman in Toronto shelter, sex abuse victim files human rights complaint.” The contents was about what I’d expect given the tendency of media to dehumanize trans women as predators for even the slightest provocation. In the past, I have made the claim that I need to posses at least a modicum of respect for someone if I am to write a response to the. To make things clear, that does not apply to Joseph Brean or the National Post. I consider this piece more so of a response to Kristi Hanna herself.

Before anyone assumes I’m about to defend Hanna, I ask that you re-read the title of this post. I don’t know Hanna personally and thus I am not going to assume that she is a straight up bigot right away, or if she merely did something dubious while under the stress of trauma related to sexual abuse. I’m going to give her the benefit of the doubt for the purposes of this response precisely because that is a possibility, but also because this can very well be the case for other cis women.

It is a common argument against trans inclusion in women’s spaces that their inclusion will be a trigger for women who have suffered abuse at the hands of men to see trans women among them. This is among many arguments against trans acceptance that I have been meaning to write about precisely because it is a very faulty claim that is home to some very sinister implications not just about trans women, but also to any woman who doesn’t fit the typical patriarchal idea of a woman. This incident provides just the right example to prove my point.

I will be quoting a lot of the original article for context here, so I recommend some of you read the link provided for context. It leads to an archive because I do not want to direct any traffic to Joseph Brean’s attempt to capitalize on a sexual assault victims trauma to use against trans people.

“It’s affecting everyone in the house. This can completely ruin your recovery, let alone your safety, let alone your life,” Hanna said in an interview.
She spent two nights sharing the room — constantly looking over to make sure her roommate was still in bed, she said — before taking an indefinite leave from the shelter. Hanna had lived for seven months at the central Toronto facility, located in an old Victorian house, but since last week has been staying with friends on couches, as a “transient,” she said. “Those two nights were hell for me.”

As one can see, there is nothing cited about anything that the trans women did to
warrant this type of reaction other than “being a trans woman.” Just a few paragraphs prior the article said that “She described herself as an “active ally in the LGBTQ community,” but said this conflict has left her feeling as if vulnerable women are unable to voice their own gender-based rights for fear of violating someone else’s.”

Right here it claims that Hanna was an active ally in the LGBTQ community yet a lot of the content of this article contradicts that claim. Aside from the obvious response of “trans people are LGBT to” let us take a look at a later bit of the article.

Hanna said the woman is in her late 20s, has facial hair, chest hair, and wears large black combat boots that “trigger” her with their thumping. She said at one communal dinner, the roommate talked about having had a wife in the past, and a pregnant fiancée, and was overheard talking about some unidentified women as “hot” and expressing her preference for Latina women. Hanna said her mannerisms came across as “piggish” and inappropriate.

Yes, you read that correctly. Apparently having a wife and finding women sexually attractive is “piggish” according to Hanna. Does this truly sound like someone who is an LGBT ally? Or does she assume that only men express any sexual preference or wear combat boots? I had a cis lesbian girlfriend in the past that fits the description that Hanna described as “piggish,” and she suffered from a lot of emotional trauma and baggage from other supposed “feminist allys” reacting the exact same way that Hanna is now. She has had people accusing her of being a rapist, or of being “secretly a man” because of the extreme sex negativity that many radical feminists hold.

And what one can infer from Hanna’s own habit of looking over her shoulder to make sure her trans woman room mate was still asleep, she clearly was in fear that she would be raped by this trans woman based solely on her being not ladylike enough. For someone who claims to be an LGBT ally, Hanna’s reaction looks awfully similar to those who opposed lesbian inclusion in women’s spaces.

Yeah, it’s getting difficult to maintain that “benefit of the doubt” at this point but let’s assume that Hanna has nothing against lesbians and these are only a problem because the trans woman doesn’t conform to patriarchal standards of what is and isn’t feminine enough? Well there you have it; an admission that the only thing her trans room mate did wrong was “being trans” and thus reminding her of a man because that’s just what she thinks of trans women.

In her defense, I could chalk this up to the fact that our society could be a hell of a lot better at teaching others about trans women. Maybe if that was the case she’d realize that this trans woman likely couldn’t afford to shave. Maybe that’s why she’s in a fucking shelter to begin with! Maybe she would have been taught that this woman was just as scared of men as she was, or that being the only trans woman in a shelter full of cis women, that she was at far greater risk of harm than Hanna was.

I have to wonder, did any of the women  who were so scared of this trans woman actually try to talk to her or get to know her? Or did they just keep their distance and speculate about how un-woman like she was? Oh, but they were too scared to do so right? Their fears kept them from doing so?

I get that much; trauma can be horrible. Many of us can be fully aware that it is irrational yet it will still completely control us. We think we have complete control but we don’t always have it. Sometimes we can’t help these things no matter how much we want to. But guess what? It’s NOT the fault of trans women that you have this trauma!!! If many of these women expressed even a bit of self awareness or compassion for trans women then I could understand, but that’s not what’s going on.

It’s not that you “can’t help” but view trans women as men, but that most of you flat out don’t WANT to view us as women. You want to see us as men so that you can excuse your own prejudice against us on the basis that we are men and thus convince yourself that we get everything handed to us already. So you can lump us in MRAs because you refuse to see any difference between a vulnerable minority fighting for their rights and an oppressor stomping down opposition, which ironically makes you FAR more similar to those men than we are.

YES, I JUST FUCKING SAID THAT, AND I’D FUCKING SAY IT AGAIN!!! Hell I’d say it into a fucking megaphone! 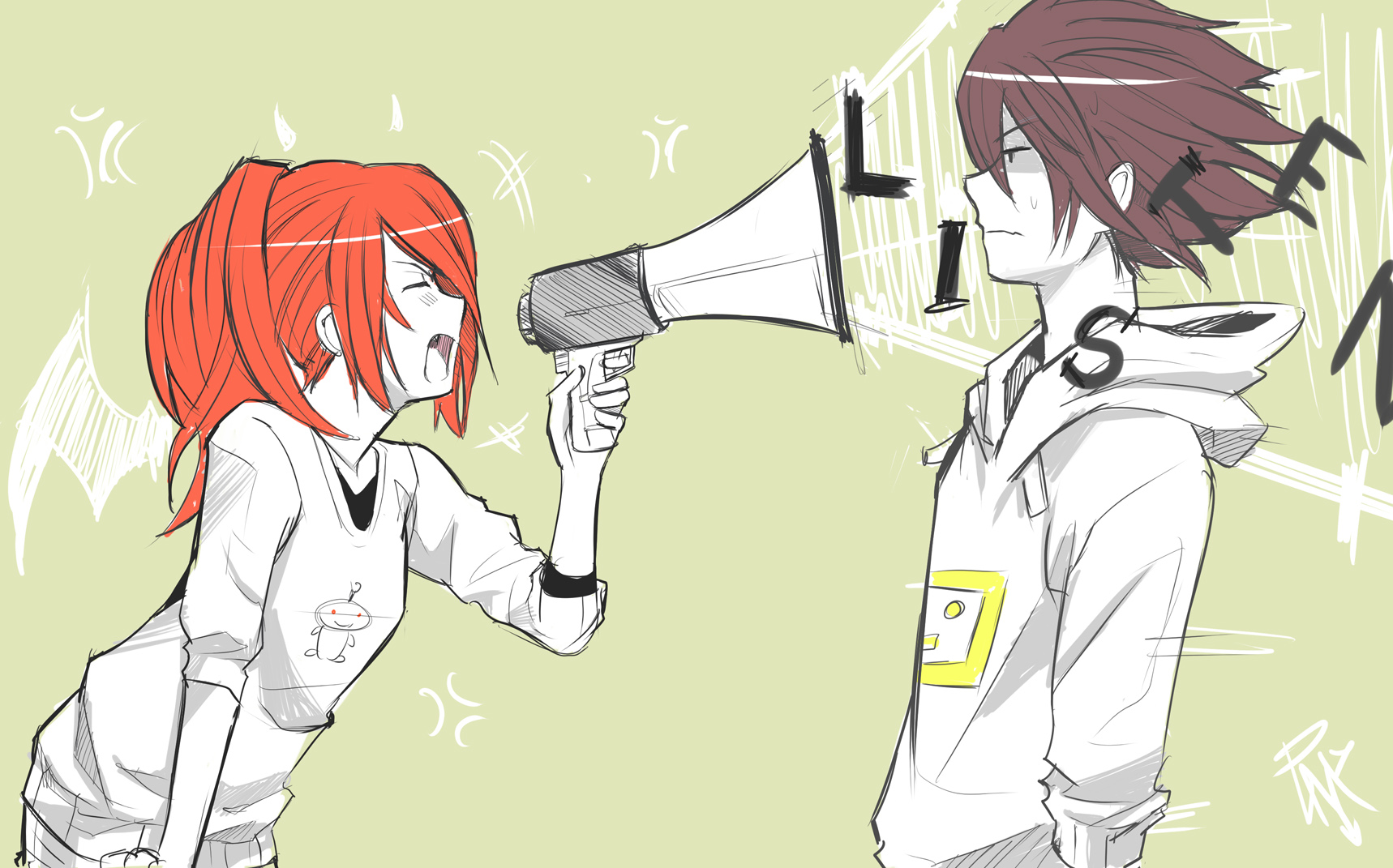 To top this all off, they even gave Hanna the option to move to another room but that wasn’t enough for her. If there is one thing that the shelter could have done better, it is that they could have notified the women before hand. But once again, that isn’t the fault of the trans woman. All she did was exist near them and that was already to upset most of these women. If that triggers your trauma then that’s YOUR problem! If this trans woman actually did anything that warranted this type of reaction then I would understand, but if you literally are afraid of trans women because they exist; that makes you a literal transphobe!

The shelter had every right to claim that Hanna was acting unreasonably. Even if she has nothing against trans women and it’s all a result of trauma, the WORST thing to do is to demand that people enable that trauma by discriminating against trans women. Even in regards to cis men this trauma is unhealthy, but it at least makes sense in regards to them. The base sense of anxiety or nervousness is not a problem if you just can’t help it, but how you act on it is a completely different story; and Hanna’s reaction told a pretty ugly one.

0 thoughts on “Political Rant: On Kristi Hanna and Trans Women in Women Shelters”