Quest of Vidhuraa is a 2D platformer released on Steam in late April of this year, and it bills itself on being a “very hard platformer game.” I’m hardly a stranger to the “Nintendo Hard” category of games and I can quite enjoy games that are not easy to complete. I just came off of beating two Castlevania games so it’s not as if I lack the skill to beat these types of games.

Rather I often grow skeptical of games that use difficulty as their selling point because you never know what kind of difficulty it is. I will say that I did not finish Quest of Vidhuraa. I got up to the 27th level before I quit because I found that the game was designed in a way where I never felt I was improving and where I needed to perform the exact same maneuvers repeatedly yet expect different outcomes.

To get on thing clear, Quest of Vidhuraa is nowhere near as difficult as something like Attacking Zegeta. When it comes to difficult games, the idea should be to design levels that the player needs to practice at and git gud enough to overcome while also not being too overwhelmingly punishing. A poorly designed title like Ghostie Quest, Bleed, or 8BitBoy will be difficult as a result of poor controls and character handling and most of the challenge factor comes from getting used to the way your character handles.

Quest of Vidhuraa is nowhere near as bad as those games given that the controls are clunky yet also manageable. The game was also clearly designed with these controls in mind and there is a decent enough difficulty curve if you get used to them. I did at least get a bit of enjoyment out of Quest of Vidhuraa so it doesn’t get the “Steam Greenlight Landfill” moniker. Unfortunately I am still not sure whether I would actively recommend it.

The level design in Quest of Vidhuraa would offer virtually no resistance if it were in a platformer with better controls, but the levels become quite a bit trickier due to the erratic nature of how Vidhuraa handles. First of all, Vidhuraa carries WAY too much inertia when he moves and every level feels like it uses ice physics. Secondly, the height of his jumps are wildly inconsistent and it often felt like lightly tapping the jump button would launch him straight upwards into a saw blade yet pressing it down hard would only make him do a light hop. This gets even worse with wall jumping that is so unpredictable that it was what lead to me ragequitting.

I can say that I did at least enjoy parts of the game before reaching that point. The game’s wacky control set up does also allow you to take advantage of wall jumps that launch you three times as far as regular jumps in order to skip past large chunks of levels. The fact that each level is only a few screens long also helps prevent you from feeling like your not making too much progress. Unfortunately there are only 60 levels in the game (20 of which were added via patch) so there isn’t that much content you will get out of the game. 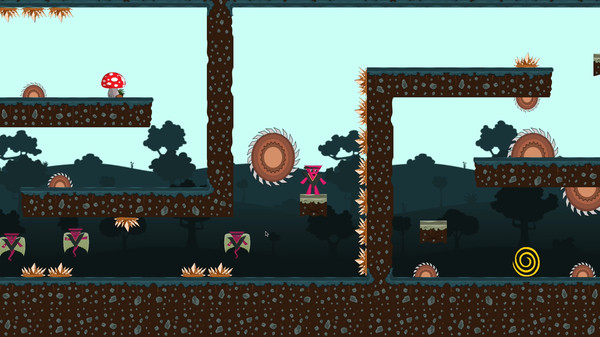 Presentation wise, the art style looks minimalistic yet effective and I also quite liked the music. Unfortunately there was an issue in that you hear the jump sound effect whenever you press the jump button regardless of whether or not your character can actually jump (IE such as when he is already in the middle of a jump). This makes it harder to get a sense of how Vidhuraa handles and only serves to make his movement feel more unpredictable and erratic.

Overall there was some potential in Quest of Vidhuraa and it’s a decent first attempt for an amateur developer, but it’s not something I’d suggest going out of your way to seek out. Thankfully the game is only $4.00 and will likely be even less during sales so it may be worth it if you can get used to those controls. I am hopeful that Firstseed continues to improve upon themselves as I am sure that if they can build upon what they have here, they can create some truly good or even great games.

[…] I received codes for. Those games were The Tenth Line, Euphoria, Meltys Quest, Nekopara Vol. 3, and Quest of Vidhuraa (not counting codes I received while writing for Oprainfall or Brash […]