Note: This was originally put up as a Deviantart journal entry on October 28th of 2016, in order to explain references to events that were relevant at the time.

Keijo is a pretty strange series to say the least, and not even due to its premise either. What is instead strange about Keijo is the way how it plays this premise straight… yet still manages to make it work. Granted it is hardly a serious series in any sense, but the fact that it isn’t a straight up comedy is what defies expectations. Keijo manages to be entertaining more so based upon the sheer amount of thought put into the fictional sport itself and how individual players approach it.

This is something that was excellently illustrated in this week’s episode. The previous episode ended on a cliffhanger taking place before the class change match. In this episode, we get to finally see some actual matches for the first time since episode 1, starting with the match between Sayaka and Rin. 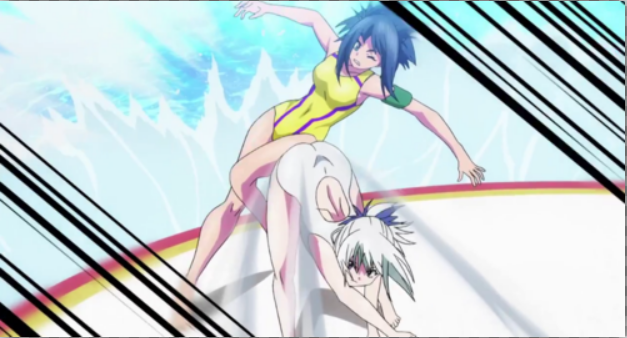 Starting the battle out, Sayaka and Rin are pretty evenly matched as they continuously counter each other’s attacks and are at the same speed. Sayaka even manages to fake out Rin by pretending she’s off her balance and then getting in a shot at her. Unfortunately that is not enough to take down Rin, who then decides it’s time to stop fucking around and uses her full ability. Sayaka is able to keep up at first but then she starts to get weaker and takes more hits (but somehow avoids losing her balance).

Outside the battle, Rin’s teammates are explaining to Sayaka’s how Rin manages to keep her endurance despite them both moving at the same speed. It turns out, both of them need to hold their breath the entire time, but Rin has a much larger lung capacity than Sayaka. So at this point, it looks like Rin is about to emerge victorious and Sayaka will remain destined to be the Joey Wheeler of this series, but Sayaka has a trump card (side note: I had to check dictionary.com to reassure myself that the term did, in fact, have its roots in the 1800s and didn’t come from Donald).

In the last thirty seconds of the match, Sayaka pulls up the bottom part of her swimsuit and gives herself a wedgie with it, which somehow gives her ass a wider range. TBH, I don’t get how this works. It would make sense for her to have more range if she was just nude and missing the swimsuit, but such a thing isn’t allowed so they need to go with the closest thing. The problem is that wedging the entire bottom half of your swimsuit between your ass cheeks seems like it would be even MORE restrictive because you have the entire thing obstructing the movement of both cheeks and preventing a full swing in either direction. Also it doesn’t make sense how she moves so much faster with it when she is still technically tied down with the same amount of weight.

Yes I get that I’m using physics to poke holes in the story of a series that is about women who fight each other using only their boobs and butts, but if you are going to try and give an explanation that sounds realistic then make sure it holds up. Regardless though, Sayaka goes into super mode, beats Rin, and then collapses because, just like with the Vacuum butt cannon, this technique also damages its user, which is why Sayaka only uses it in the last 30 seconds. 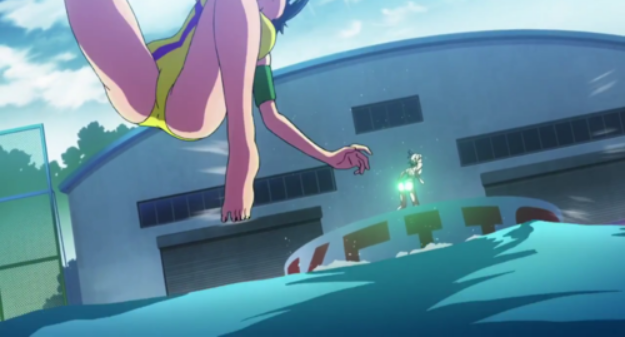 At this point, we are halfway through the episode yet we still have two matches to go, which means they are going to go by a lot quicker than the one we just saw. The first of these is Non up against three buff masculine looking girls. Non just sits there nervous while two of the girls each charge the third one, but none of them move her because she has an ass of iron. 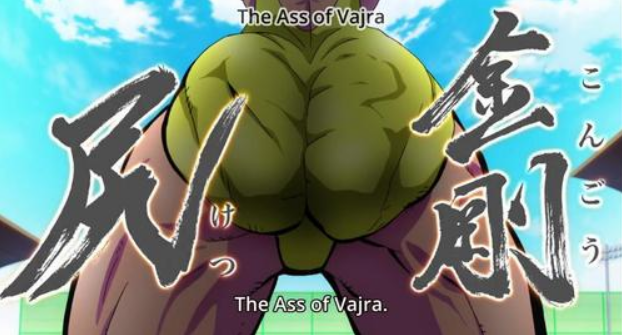 There we go. Anyway Yoshida then makes short work of the other two, and then decides to direct her attack at Non. This somehow results in Non’s soft ass absorbing the attack and reflecting it back at Yoshida, which knocks her into the water. No don ‘t ask me how that makes sense, I’ve given up on trying to at this point. However, it still pales in comparison to how ridiculous the next battle is. 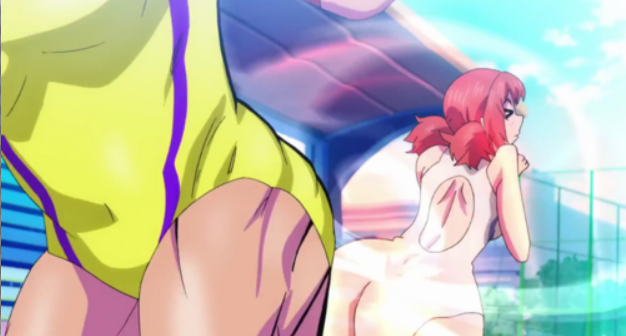 So the next match is Kazane up against Mio, who has never lost as match and is considered the best student in the school, and two red shirts. At first, this seems like it is because Mio is just that skilled with how she manages to counter all of Kazane’s attacks. However, Kazane also has a trick up her sleeve. Earlier when she gave out back massage’s to every student in the school, she was able to read their technique just from feeling them up. So she knows Mio’s moves. Furthermore, she let the two red shirts in on her plan so they could all corner Mio and eliminate her first. So now it looks like she is cornered and will face her first loss, but of course, she ALSO has a trick up her sleeve, or in her cleavage in this case. 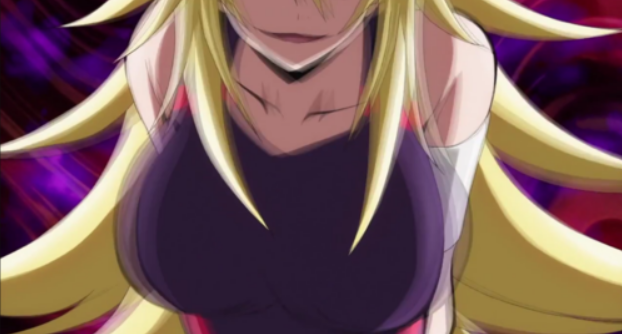 She gets out of her predicament… by swaying her breasts back and forth and using them to hypnotize all three of her opponents. Do I even need to say anything? Seriously, do I? Because I don’t know if I even can. I don’t know if I should think this is a excellent in its sheer absurdity, or if this is absolutely idiotic and lazy writing? I was able to suspend my disbelief enough with everything else this series had, but this is just ridiculous. If anything, it is simply due to the fact that there is no skill in just hypnotizing your opponents and pushing them into the water.

Part of me wants to think that this series has already jumped the shark four episodes in, but then I remember that one of our protagonists is going to need to find a way to beat her, and that whatever solution they find is going to be even more absurd. Still though, I can’t help but feel that revealing Mio’s victory streak being entirely because of her ability to hypnotize her opponents damages her character a bit. It takes away the sense of build up to her abilities that was previously established. Although at least she still has her role as this series’ resident fanservice girl established.

Well anyway that covers the third match and the episode cliffhangs you right before Nozomi’s match. While I did find this episode to be a bit ridiculous, I find that I need to keep reminding myself of what I’m watching. I think it says something that I am at least caught up in the matches enough to care what is going on and that I am even paying attention to something other than the fanservice in the first place. Either way, I can say that I am at least interested in this series just to see how much more ridiculous it will get.