Note: This rant was originally posted on October 25th of 2016, just to explain any comparisons to events occurring at the time.

In my first episode commentary on the anime series Keijo!!!!!!!!, I made a point about how the main factor that motivated me to watch it was Kotaku’s hit piece on it. I initially said that I didn’t even bother to read the article in question due to a sheer lack of respect. I changed that now and have read through it simply so I can confirm that yes, Heatstreet managed to make something even stupider. Oh, and also because the first thing you read in this article is a quote from Kotaku’s.

The problem with Cecilia D’Anastasio’s article can be summed up in this paragraph alone. Dorm room shenanigans? Girls flirting with each other? God forbid we acknowledge the fact that some women ARE in fact, attracted to other women and may even fool around in their own privacy with no guys around.  So yes we can also add homophobia to the mix of this articles horrid implications. Also worth noting that she does not care that the women have discernible personalities, and that in this show “women are valued at the sum total of their body parts.”

You know Cecilia, that really says a lot about you. Despite the fact that the girls have discernible personalities, you still are incapable of viewing these women as anything more than walking pairs of tits. It isn’t the show that presents these girls as sex objects, it is you that is doing so. The only thing wretched here is Cecilia’s blatant sex negative, misogynist rhetoric. It is telling that most of the infamous “Tumblr feminists” tend to despise sex negative rhetoric and that the term SWERF (Sex worker exclusionary radical feminist) has such a negative connotation, yet about half the feminist writers for major sites still tend to operate on outdated second wave feminist principals. It is almost as if these sites don’t actually care about women or feminism at all and are just trying to give off the impression that they are so they can appeal to them seeing as how they scarred off the core gamer audience ever since GamerGate became a thing.

Also lets take a look at the length of this piece. 412 words? I’VE seen Facebook posts that were longer than this. For fucks sake, I’VE wrote longer than this during periods where I have had writer’s block. You call this kind of shit professional? Okay yes, if it was a news article then the short length would be justified, but this is an opinion piece, one that needs actual writing to back it up. But of course, all that Cecilia does is just point out the premise and go “hey this exists, get offended by it and give us all your clicks!” So yeah, Kotaku is a fucking joke, and also the sky is blue, grass is green, and Half Life 3 is taking a very long time to get released.

But that’s not the main story here, instead, we have accusations of child porn. You know, of all the things that you are trying to turn into buzzwords, maybe child pornography is not the best one. I would think that people would want the sexual abuse of children to actually be taken seriously and not used to insult anything you don’t like. Claiming that something is child pornography is a pretty serious accusation, and is one that doesn’t make much sense at face value either. I can at least see the logic when it comes to arguments against lolicon or Shotacon, but in a show where almost all of the girls look like adults and have mostly large breasts? Surely Louise Mensch has a strong argument to back up her claim. 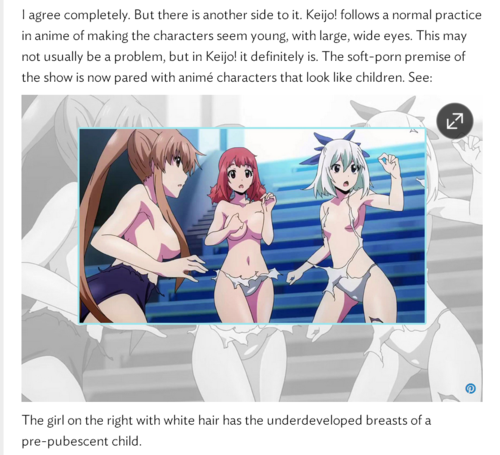 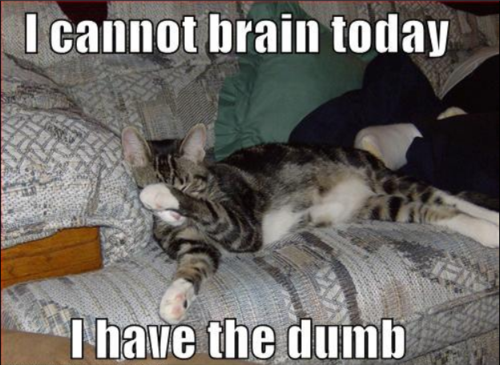 Never mind that her breasts clearly ARE developed, they just aren’t as big as the rest of the cast’s. You know, kind of like women in real life who won’t always have DDs either. Even if the claim is that Keijo!!!!!!!! is CP because the characters are teens and are thus underage, that doesn’t even work because anime looks notably different from real life. Anime characters do not posses the same type of proportions that people in real life do. Anime characters typically look younger than they would in real life, it has been a commonly established anime trope for years. 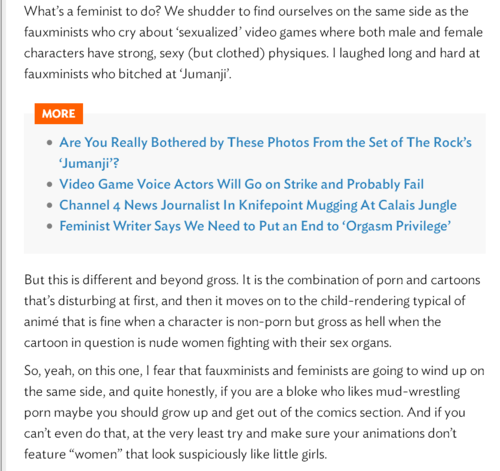 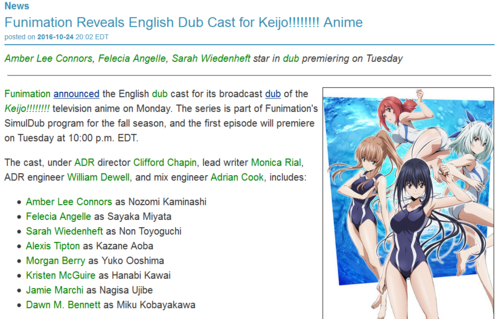 (Update: To counteract the inevitable “it did because it got canceled due to poor reception” claims, no it didn’t, it was because of issues with the publisher and the creator losing interest)