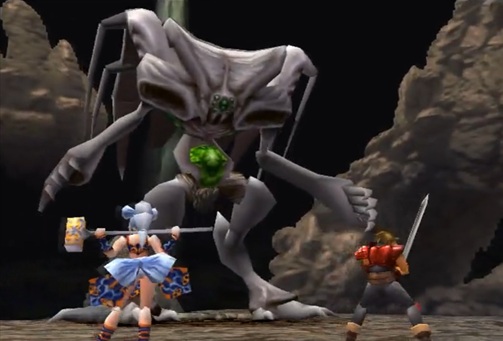 Aha gotcha, mentioning The Legend of Dragoon at the end of my last Amazing VGM wasn’t a coincidence, I’ll bet you didn’t see that one coming did you? Yeah I still need to write my review on this game cause I’m almost 3/4s of a year overdue on that, but the review is lowest on my priority list. Anyway, this week’s VGM is what I consider to be this game’s best battle theme… which isn’t saying much cause I’m not too into the other ones (aside from the Forbidden land battle theme, that one is badass). They aren’t bad by any means, but they just sound so standard. Granted, i would say that fits since The Legend of Dragoon is a very standard JRPG, but it is so in a way that reminds one of why they liked JRPGs in the first place.

What I like about this song is its unique and slower pace than the other tracks in the game, and how it sounds imposing and dire without any of the typical musical tropes like loud drums, low pitched brass notes, or an organ. I would almost describe the song as “jazzy” if it wasn’t so tense. When a fight starts up and you hear the first few notes on that wind instrument, combined with the smooth drum beat and those string strikes, you know you’re in for serious business, and that if you make one wrong move, you’re screwed, which is definitely true during some of the fights this plays during (Magician Faust anyone?).

That synthesized choir in the background also adds an even more dire and ethereal feel to this song, like you are so close to death that you can hear the voices of the spirits calling to you. I can only imagine how great this would sound if it were re arranged with an actual choir. I also like how it is used sparingly at the beginning of the game, but then starts being used near constantly during the last quarter of the game, just to show how much stronger and more serious the enemies you are facing are.

Lastly, the best thing about this track is that, despite the emotions it gives off, it is just flat out addicting at that. The melody is smooth and catchy and the arrangement is not overly bombastic or aggressive. This gives the song a much more subtle vibe that doesn’t explicitly tell the player what they are supposed to feel, but it still makes them feel it regardless.

Well anyway, there you have this weeks VGM, a classic boss theme from a classic JRPG. Am still holding out for the sequel. It’s been 17 years but I’m sure they will pull through, right?

0 thoughts on “Amazing VGM: Boss Battle 3 (The Legend of Dragoon)”