Note: This was originally put up as a Deviantart journal entry on October 16th of 2016, in order to explain references to events that were relevant at the time. Also the socio-political talking points do not accurately reflect my current beliefs, and this piece is just up for the sake of consistency.

The following Journal entry will contain spoilers for Keijo!!!!!!!! episodes one and two. 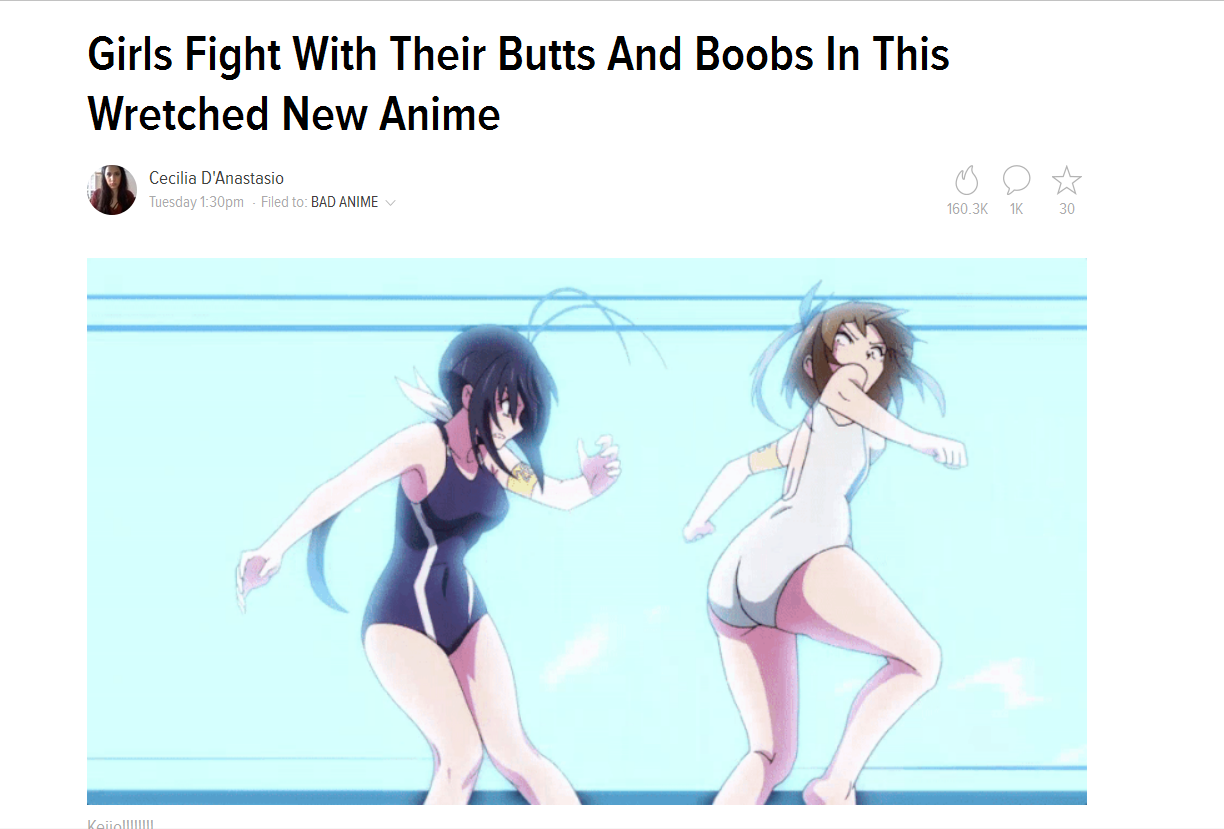 … to be honest, I didn’t even bother to read the article in question. That’s how little respect I have for these regressive, sex negative crones. Make no questions about it, the entire idea that portraying female sexuality is sexist is misandric in and of itself. The reason for this is because these 2nd wavers view male sexuality as inherently threatening because they think all men are rapists and are incapable of treating women as human beings. If a man ever has sexual thoughts about a woman, that must mean he doesn’t care about them.

Furthermore, there is the obvious Lesbian and Bisexual erasure that comes with attitude. If men enjoying female sexuality or having sexual urges means that men are a threat to women, then how is a lesbian woman supposed to take that? Is she supposed to believe that she is dangerous to other women because she finds other women sexually attractive? Does this mean that she is instead some type of freak or defect? This is even worse for trans lesbians such as myself considering that it keeps many of us from realizing we are women until much later in life because we are lead to believe that we can’t be a real woman if we like female sexuality. So yes, I have plenty of reason to despise this view seeing as how it has caused me real world harm. I’m going to stop here, however, seeing as how this is a rant for another time and is not the subject of this impressions piece. Anyway yeah, I decided to start watching this series purely out of spite. Hell I even decided to leave the author with this Zinger on Twitter. 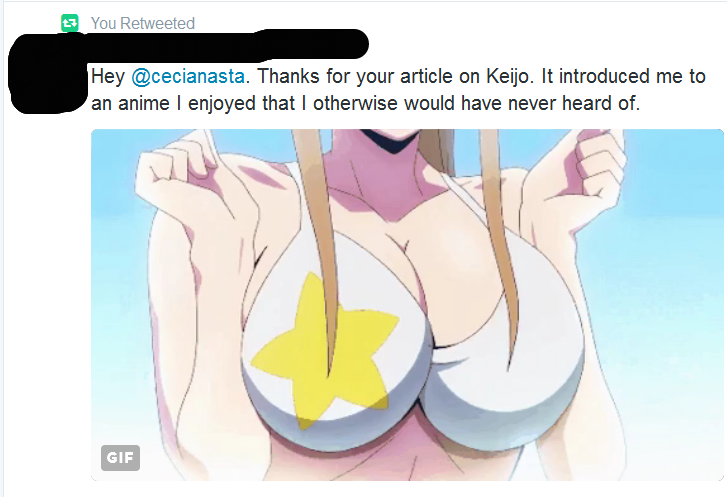 Note: I blacked out the name because this was posted on my lewd alt, which I don’t want people going to thinking it’s my main. My main is here.

So yeah, that tweet should tell you my opinion on Keijo based on the two episodes that are currently out. However, I should probably be more specific about it since this is an impressions piece. Keijo’s storyline is about a fictional sport of the same name where women try to knock each other off platforms floating on water. The rules are that they can only use their boobs and their butts, and if they either get knocked into the water or off their feet (even if they are still on the platform, they need to always be on their feet) then they lose. The series stars Nozomi Kamanashi, who is hoping to make it big as a Keijo player so she can get herself and her family out of poverty.

The first episode was about the tryouts at the Setouchi Keijo Training School. It was a match that consisted of multiple platforms interconnected by narrow beams, and every student faced off against each other. The better that one’s performance is, the more likely they are to be accepted. The match continues until the only two left are Nozomi and a purple haired and over the top villain player named Hanabi. The two have a decent fight scene that, somewhat surprisingly, ends with Hanabi’s victory. Nozomi gets discouraged for losing but feels better when she is reminded that it isn’t just the first place winner that makes it in and that 2nd place is still a guaranteed acceptance. 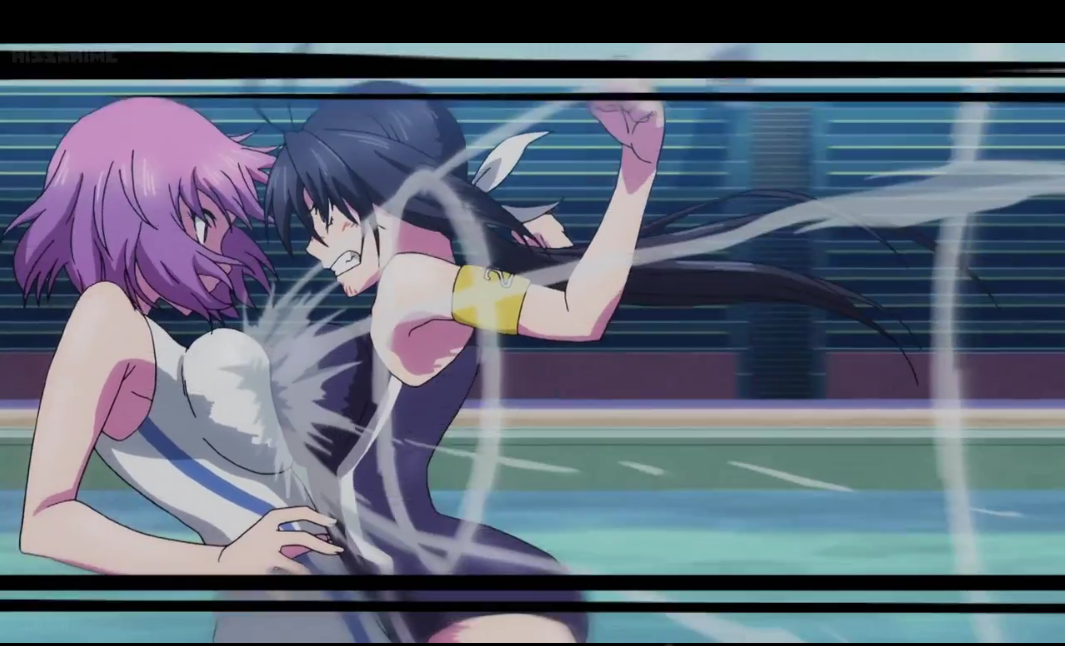 What I really need to give this anime credit for is its visual design, which was used to great effect in the premiere episode. I don’t just mean this in the sense that the girls were attractive, but also in the way the fights play out. One has to admit that it requires a bit of creativity to come up with distinct moves and fighting styles using only your breasts and ass. Yes it is entirely unrealistic for anyone to be able to swing their ass rapidly enough for it look like Dragon Ball Z punches, but being over the top and exaggerated has always been the point of anime.

The second episode involved a bunch of absurd training exercises made specifically to train one’s boobs and ass. Some of these include running while carrying dumbbells with their ass cheeks, and pushing tires forward using their boobs, and backwards using their ass. Yes they sound ridiculous, but it would be kind of necessary to train those specific parts of your body considering they aren’t commonly used in everyday life. The main exercise, however, is the students being divided up into teams and playing a volleyball like exercise where they need to use only their butts to keep a ball in the air using teamwork. Of course it starts out with the team getting screwed over because the wind keeps blowing the ball in different directions, but Nozomi manages to figure out how predict the wind patterns using their team mate Kazane, which eventually leads them to victory. The episode ends in a cliffhanger where the team is up against one of their teachers.

My overall impressions of the series are fairly positive. While the story has yet to really grab me, I have found what was shown to be fun to watch. Also for a series that is accused of being male pandering, there aren’t a lot of male characters. There have so far been no gags about men peeping on the girls, and the girls themselves seem to be pretty strong and well developed. Of course you can expect 2nd wave nutjobs to tune anything of quality out because they only want to bitch about objectification.

Anyway I am hoping my motivation stays with me this time and I actually make this a regular series.